Two people were detained for questioning after a man was shot three times in a drive-by shooting outside the Chicago Hilton Hotel early on Monday, police said. Officers at the scene said the incident is narcotics-related.

The victim was at 71 East 8th Street near the hotel’s south entrance when someone fired several shots at him from inside a silver GMC Acadia shortly after midnight. The vehicle sped away southbound through an alley, leaving the victim shot three times in his legs, police said.

Investigators found money on the ground near the shooting scene, leading them to suspect that the incident was a drug deal. 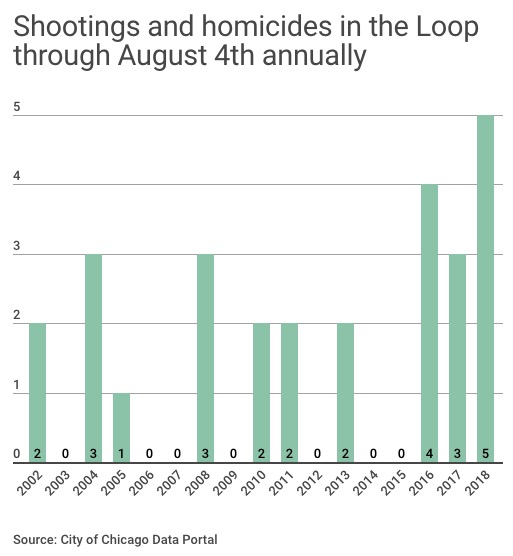 Two men who matched witnesses’ descriptions of the suspects were arrested near the crime scene about 15 minutes after shots were fired. They were taken in for questioning by Area Central detectives.

Police said the victim was transported to Northwestern Memorial Hospital where he was in serious but stable condition.

This morning’s shooting is the sixth in the Loop so far in 2018, with two of the shootings being fatal. Through August 4th, the Loop saw more homicides and shootings this year than in any year since at least 2002, according to statistics posted on the city’s data portal. Complete information for years before 2002 are not available on the city’s site.