Muggings are being reported at least twice as often as they were just five years ago in the heart of Chicago’s business and tourism districts, according to city data. A police beat that covers the Magnificent Mile and Streeterville is now among the worst for robberies in the entire city.

And the police beat that covers the River North dining and nightlife district has seen robberies spike nearly 400% since 2014. If you want to get robbed in Chicago, River North is the place to go. It is now the #1 police beat for robberies citywide. 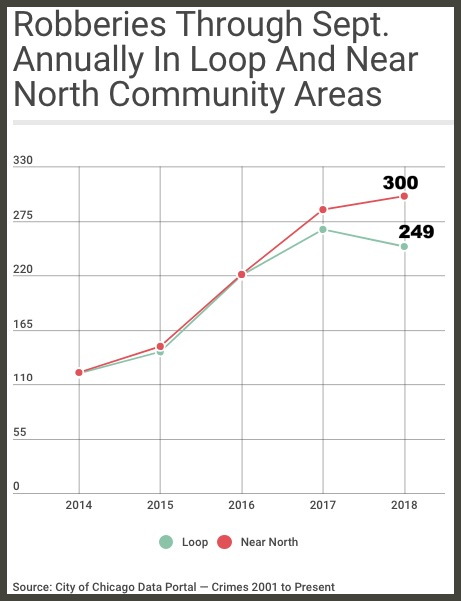 While cops in the Loop have seen some success in reducing robberies during the second half of this year, hold-ups in that downtown neighborhood are still 100% higher than in 2014.

Over the weekend, reports of hold-ups in the Loop and Near North flowed over police radios:

1:20 a.m. — Five offenders rob a woman as she gets into a cab near Ontario and Wells.

Sunday
6:40 a.m. — Woman is battered and robbed as she gets out of an Uber near State and Elm. 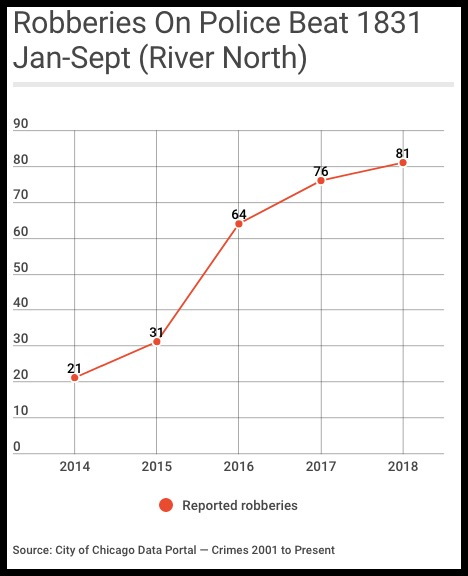 The troubles being experienced downtown are reminiscent of the seemingly non-stop robberies that were reported in the Wrigleyville and Boystown neighborhoods between 2011 and 2013. During each of those years, the Lakeview neighborhoods experienced more hold-ups than any other part of the city.

In Wrigleyville and Boystown, private investment in security patrols, increased neighborhood awareness, and an aggressive anti-street crime strategy that bucks the Chicago Police Department leadership’s generally passive approach to fighting crime has paid dividends. Robberies are at an 18-year low in the Lakeview neighborhoods through September.

And what about police Beat 1924, the patrol area that covers the heart of Wrigleyville and Boystown? The beat that ranked #1 for robberies in the entire city for nearly three years straight? Over the past 90 days, it ranks #155 out of 267 beats. For the past year, it’s #38.

Not far behind is a real eye-opener: Police beat 1834 (map), which covers much of the Magnificent Mile and Streeterville, now ranks 13th out of 267 beats for robberies, with 84 cases over the past year.

We’re certainly not experts in policing, but we are well aware of what has worked here in Wrigleyville and Boystown. Our non-expert opinion is this: Until police leadership gets serious about catching violent crime offenders, the criminals are going to keep going where they can get away with it: River North, the Loop, and the Mag Mile.
—————–
Support CWBChicago’s reporting team with a monthly or annual subscription.