A 23-year-old man was carjacked by two offenders Tuesday evening in the Wrigleyville neighborhood, police said.

The victim had just entered his parked car in the 3800 block of North Kenmore around 7:55 p.m. and he was trying to close the door when two men approached him. Police said the robbers ordered the man out of the vehicle while implying that they were armed with a handgun. The victim complied with the robbers’ demands and both offenders climbed into the man’s vehicle, then sped away southbound on Kenmore.

Taken was a white 2014 Chevy Impala with distinctive-looking black wheels.

Police said the carjackers were two black males: one wore a gray hoodie and the other wore a black hoodie. Area North detectives are investigating. 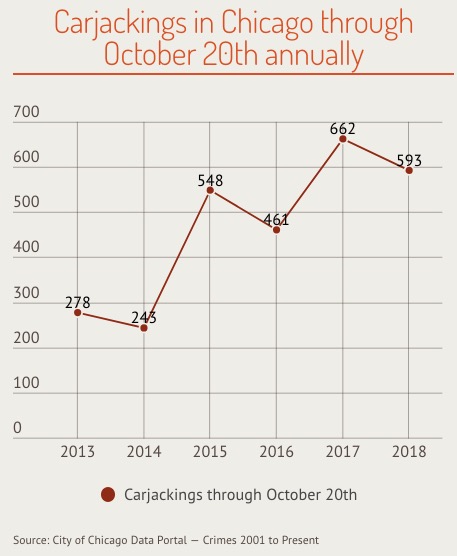 For those who like to see Chicago’s police executives spin statistical yarns, there are few better opportunities than the annual police department budget hearings at City Hall.

Yesterday, Chicago Police Superintendent Eddie Johnson and Deputy Chief Jonathan Lewin boasted that carjackings are down by 14% compared to last year and down 10% since Johnson established an anti-carjacking task force.

Of course, whenever someone in a white shirt Chicago police uniform cites a statistic, wise listeners dive deeper to learn what was not said.

What did Johnson and Lewin not say in their testimony yesterday? That carjackings continue to be reported at more than twice the rate of just five years ago. Through October 20th, 592 carjackings were reported in the city this year, that’s 144% higher than the same period in 2014 and about 110% higher than 2013.

While any reduction in crime is welcome, greater transparency and forthrightness from the people in charge of public safety would also well-received.
—————–
Back CWB’s reporting team and we’ll reward you with members-only reports and services all year long. Join HERE for just $49 a year or $5 a month.