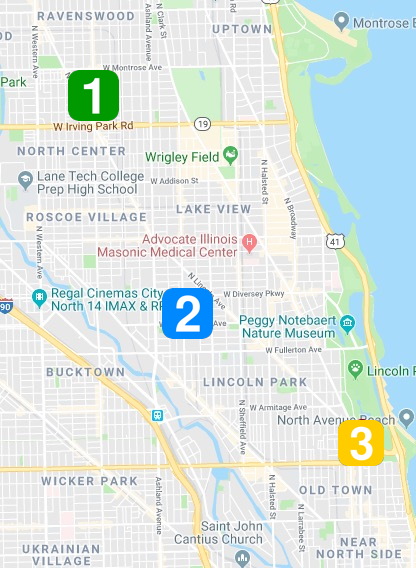 Here’s a round-up of some recent crime reports on the North Side:

The CVS at 4051 North Lincoln was robbed early Thursday morning, according to a police report. The offender entered the store just before 4 a.m. and ordered the cashier to hand over the register contents before he fled from the scene. Police said the offender is a white male who was wearing a black cap and a black sweater. He may have been accompanied by a white female who wore a black Nike baseball hat, a pink sweatshirt, and gray sweatpants.

Police said a woman reported that two men approached her in the 2500 block of North Wayne around 11:45 p.m. on Friday and ordered her to “drop everything” or they would shoot her. The victim told police that she saw one of the offenders holding something that appeared to be a handgun or a Taser. The offenders were described as two black males with black hoodies tied tightly around their faces. They were last seen heading eastbound on Wrightwood.

Another North Side bar-goer has fallen victim to thieves who posed as ride-hail service drivers. Shortly before 4 a.m. on Saturday, a 24-year-old man left a bar in the Old Town neighborhood and encountered a man in a van who asked if he needed a ride home. The victim agreed and got into the vehicle, which had at least one other occupant. Remarkably, the victim also gave the driver his cellphone to play music on the van’s sound system. At that point, the driver pulled over in the 1600 block of North LaSalle in a ruse to “look for something” in the vehicle. When the victim stepped out to assist with the search, the van driver sped off with the victim’s phone and other property. Police said someone has been trying to use the victim’s credit cards since they were stolen, but no arrests have been made. The vehicle is described as a “beat-up” older silver van with Uber logos on the front and back windows.

Original reporting for your neighborhood. Donate $49 or more to our operating fund and you’ll receive a year’s worth of exclusive reports and services. Monthly plans from just $5 available.