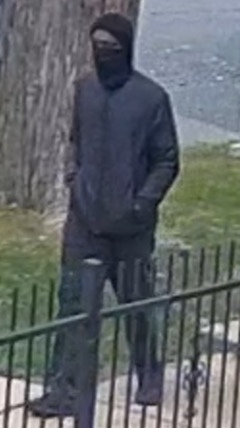 Chicago police have changed their description of the suspect who is being sought in connection with two apparently random homicides on the streets of Rogers Park this week. But the department refuses to say why their description has changed.

Willard “Douglass” Watts, 73, was shot dead as he walked his dogs around 10:05 a.m. Sunday. Then, 24-year-old Eliyahu Moscowitz was shot as he walked on a bike path in Loyola Park around 10:20 p.m. on Monday. Neither men were robbed. They did not know each other. They were each shot at point-blank range in the head.

On Wednesday, police released videos of the suspect approaching Watts and then running from the murder scene. The police department issued a community alert that stated, “the offender is described by witnesses as a male black, thin build, wearing dark clothing.”

Then, in a community meeting Wednesday night, police Sgt. Shawn Sisk pushed back against some audience suggestions that the description was inaccurate or racist profiling.

The description was based on technical analysis and witness information, Sisk said. “I’m sorry if that ruffles some feathers, but this is about solving this crime.”

But at a second community meeting on Thursday, police leadership backed away from their earlier description. “We haven’t conclusively determined the race,” First Deputy Supt. Anthony Riccio said.

The police department’s chief spokesperson, Anthony Guglielmi is quoted by People as saying Thursday “We are classifying him as a dark complected individual. We aren’t certain what race that could be based on the video.”

Even Sgt. Sisk, who strongly backed the department’s description on Wednesday, had a different description on Thursday, according to the Loyola Phoenix: “He said while race isn’t determined, police are looking for someone who fits a certain description.”

Police did not say why their description, based on technical analysis and witnesses had changed on Thursday. Guglielmi did not respond to a Friday email seeking an explanation.

Without an explanation from officials, the public is left to wonder if there have been substantive new developments in the investigation that led to the change or if the department capitulated after being called racist by a handful of people.

Police are urging anyone with information, video, or potential leads to contact them at 312-744-8200 or at www.cpdtip.com.