In the video, a graffiti “artist” seems to not have a care in the world as he coats the side of a popular Boystown bar with a massive 12-foot wide spray paint tag early on Friday, November 9th.

ProgressBar owner Justin Romme tells us the tagger made his mark around 4:25 a.m. Friday. The video shows a taxi cab cruising past as the tagger gets to work. An always bustling 7-Eleven is across the street. But records show that no 911 calls were placed to report the vandalism.

After the tagger finishes off one can of paint, he takes time to walk over to Roscoe Street and toss the empty. Then, he spins around and gets back to work with a fresh can.

Details of the man’s face are not clear in the video, but there are some obvious features: He is white or Hispanic and appears to have some extra pounds. There’s a definite sashay in his walk, a feature that someone may recognize. It looks like he’s wearing brown boots. And, obviously, he was spending time in Boystown that morning.

If you happen to know who the tagger is, Justin at ProgressBar would love to hear from you. Drop him a line: info@progressbarchicago.com 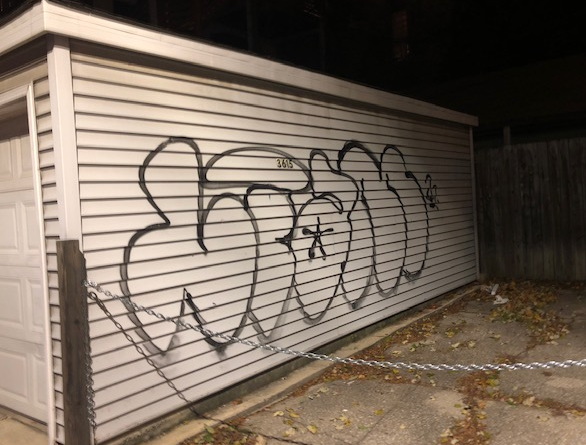 After posting our story, a neighbor reported that the same tagger has struck at 3325 North Halsted and in the 3600 block of North Wilton. Even more reasons to get this guy into a courtroom.
—————–
Our exclusive reporting is 100% reader-funded. Please make a contribution to our operating fund or purchase a subscription today.