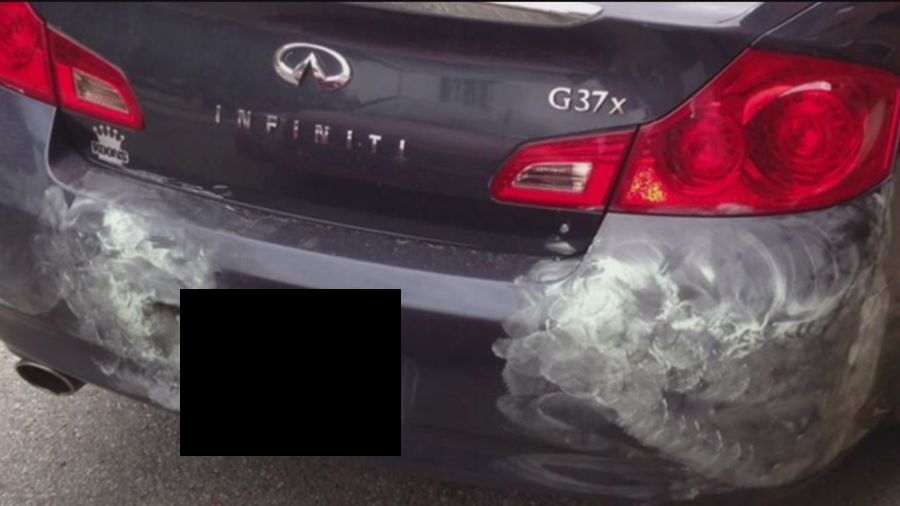 Heads up, car owners. It appears that one of Chicago’s tried-and-true scams has regained popularity with local criminals: dent “repair.” If you’re not careful (or worry too much about what scam artists may think of you), it’s easy to fall into their trap.

Here’s how it works: You’re out minding your own business, maybe leaving a grocery store or the gym, when a vehicle pulls up real close to yours. Then, someone quickly jumps out of the other car and starts buffing on your car without even asking.

Quickly, another occupant of the car walks up and strikes up a conversation. They will almost always try to draw a connection by asking if you remember them from the car dealership (they see the dealer name on your license plate frame or on a dealer logo on the back of your car). Other times, they’ll pretend to have “just finished” working on another car of someone you may know. If they see you walk out of a gym, they might say they just “fixed” so-and-so’s car. “You may know her. She’s taking a class in the gym over there.”

That’s what happened to one Lincoln Park resident in November, the victim’s boyfriend told us. “She said it happened so quick, they marked her, and used our dealership to start a convo: ‘Hey, remember me from ‘Nissan Autobarn’?”

The fast-talking guy may say that he and his buddies work for a real car dealership, but they’re trying to make some money on their own to start their own business (or pay for their kids’ toys for Christmas).

Notice that through all of this, they don’t give you a chance to say “no” to anything.

Long story short: The men won’t be doing any real repairs to your car. The most they will do is spread something they’ll call ”dent filler” on your car and tell you to leave it on for 48 hours. The “filler” is nothing but ordinary body wax. And you’ll never hear from them again about the “follow-up appointment.”

In fact, the odds are pretty good that the scammers will cause more damage to your car than you had before they arrived.

“He insisted he would repair [a dent] while we shopped. I didn’t consent to the work, but when I came out, he had spread what he called ‘self drying was’ on the rust and scratches. He did pull a dent out.”

“I offered him $50 for the dent and agreed to meet him back at the store with the rest of the money after the ‘two hours necessary’ for the wax to dry,” the man said. “He became upset and demanded more money, even demanding that he could follow us to the bank.”

Your very best move is to get yourself and your car away from the men ASAP without engaging them. Lock yourself in your car.  Start moving your car out, if you can. If you’re blocked in, call 911 and tell them that you are trapped in your car by men who are threatening you and who are demanding money. Use your phone to take photos of the men, their vehicle, and their license plate. Video of their actions would be great, too.

If you aren’t in your car when the men approach you, walk away and go somewhere safe to call the police. Stay there until the men leave or the police arrive.

Never allow yourself to be intimidated into going to an ATM for these hoodlums. Don’t even suggest issuing a check. Keep your purse zipped, your wallet tucked away, and give them nothing.

Truth be told, there is very little that the police can or will do about the scam itself. But threats toward you and any kind of unwanted physical contact with you are crimes that police can take action on if you sign a complaint.

In the case of the Lincoln Park woman who was confronted by scammers, she managed to drive away from the men. “They followed her for a bit,” but eventually went their own way, her boyfriend said.

—————–
Our exclusive reporting is 100% reader-funded. Please make a contribution to our operating fund or purchase a subscription today.
———-
Email      Facebook       Twitter       YouTube
About CWBChicago 4360 Articles
CWBChicago was created in 2013 by five residents of Wrigleyville and Boystown who had grown disheartened with inaccurate information that was being provided at local Community Policing (CAPS) meetings. Our coverage area has expanded since then to cover Lincoln Park, River North, The Loop, Uptown, and other North Side Areas. But our mission remains unchanged: To provide original public safety reporting with better context and greater detail than mainstream media outlets.
Website Facebook Twitter YouTube