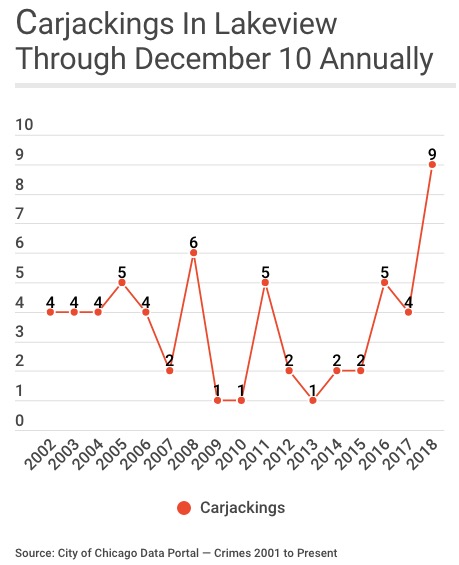 A Lakeview woman was carjacked at gunpoint as she loaded her vehicle Monday afternoon, according to a police department source.

The woman was loading her 2013 Volvo SUV near the intersection of Byron and Janssen around 3:15 p.m. when three masked men approached her car and forced her out at gunpoint. The trio then climbed into her car and sped away, last seen turning southbound on Clark Street.

A police source said the victim described the offenders as three black men dressed in all black clothing who wore masks. All were between 5’8” and 6-feet tall and of average build.

The stolen vehicle is a dark blue Volvo SUV with Illinois “share the road” specialty plate of 1502BK.

Monday’s carjacking is the ninth to be reported in Lakeview this year. That is far more carjackings than were reported in any previous year since at least 2001, according to the city’s crime data. Most of the incidents have involved victims who were targeted while sitting in idling cars.
—————–
Support CWBChicago’s reporting team with a monthly or annual subscription. Members-only perks await!