Back in March, CWBChicago published a three-part series that exposed holes in Cook County authorities’ claims that hundreds of inmates were jailed in Cook County “just because they are poor” and unable to put down a bail deposit of $1,000 or less.

Our team secured a list of the inmates that Cook County Sheriff Tom Dart’s office was referring to when Dart repeatedly made his claim about the “hundreds” of people who were supposedly jailed “because they are poor.” Then, we pulled scores of those inmates’ court files at random.

The truth, we reported on March 6th, on March 25th,  and March 26th was that about 85% of the people on Dart’s list had been free on low or no bail, but they violated the terms of their release by skipping court or committing more crimes and wound up back in jail.

So, you can imagine that we were skeptical when Rev. Jesse Jackson made a pre-Christmas plea for 19 publicly-unnamed Cook County Jail inmates to be released. These individuals were jailed merely for being poor, Jackson said, adding that “liberating the poor” was in the spirit of Christmas.

A Dart spokesperson claimed that “most of” the 19 individuals had never had a bond review.

And the Sun-Times’ editorial board, apparently taking no time to investigate the veracity of Jackson’s claims, wrote an opinion piece calling for the 19 people to be freed.

“There’s no excuse for denying a bond review to people who have a right to one under state law,” they wrote in calling for Jackson’s mysterious 19 prisoners to be unlocked.

Dart personally retweeted a link to the Sun-Times story. 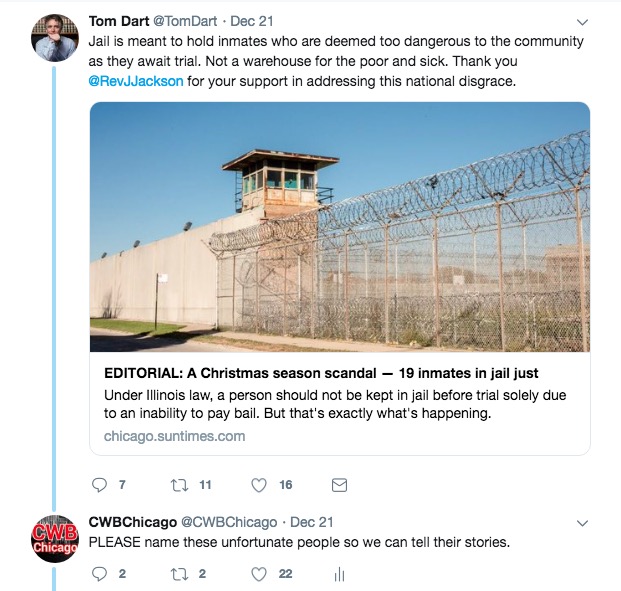 CWBChicago last week asked Dart, Jackson, and the Sun-Times to please name the 19 people who were jailed merely for being poor so we could tell their stories publicly. No one responded to our inquiries.

Now, the Sun-Times has published a letter from Cook County Chief Judge Timothy Evans. The judge wanted to set Jackson, Dart, and the newspaper straight:

“The fact is that our judges previously released 15 of these defendants to the community. For varying reasons, they returned to jail because they did not comply with the terms of either their pretrial release while their cases were pending or their probation sentences that allowed them to avoid prison time when their cases concluded.”

Incredible, isn’t it? Evans found the exact same flaws that we found in March. The 19 weren’t jailed merely for being poor. Fifteen of them are jailed because they violated the terms of other release agreements.

“Three of the defendants were in custody because they were enrolled in substance-abuse treatment in jail. Generally speaking, defendants in jail-based treatment complete a 90-day program so that they can increase their chances of successful sobriety when they return home.”

So, now, these three weren’t jailed for being poor, either. They agreed to be in jail as part of a drug recovery effort.

Of the 19 people Jackson pleaded to have released, only one is unaccounted for in Evans’ letter.

CWBChicago has filed a Freedom of Information request for the 19 individuals’ names and inmate ID numbers. We look forward to telling you the truth about their situations, just as we did about hundreds of others in March.
—————–
Back CWB’s reporting team and we’ll reward you with members-only reports and services all year long. Join HERE for just $49 a year or $5 a month.