Thousands of people who were charged with narcotics crimes in Chicago last year escaped prosecution because the Illinois State Police (ISP) Crime Lab failed to return forensic tests of suspected drugs on time, an investigation by CWBChicago has found.

During one court session in Skokie last Thursday morning, lab results had not been returned for seventeen drug cases involving sixteen defendants. And there are no indications that the state lab will be correcting the timeliness problem any time soon.

The clock starts ticking when police take a suspected narcotics offender into custody.

Prosecutors have 30 days to present laboratory proof of the weight and chemical make-up of substances that are the basis for narcotics charges. The deadline is 60 days if the defendant is not held in custody, said Jennifer Coleman, head of the narcotics bureau in the Cook County State’s Attorney’s Office. 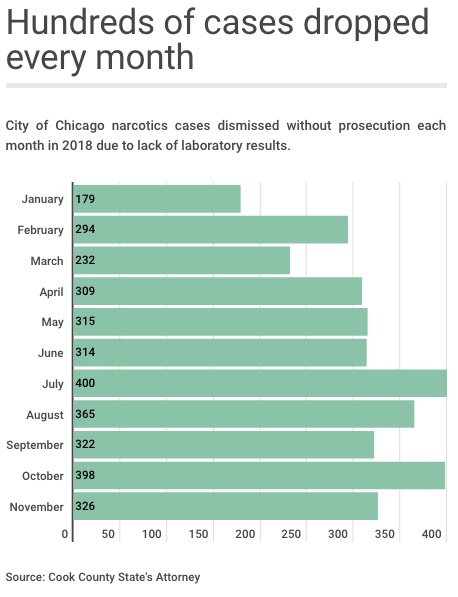 In Chicago, suspected narcotics are sent to the ISP Forensic Science Center in Little Italy for testing.

The lab results are needed at a defendant’s probable cause hearing, which is usually scheduled for a couple of weeks after their arrest. If the results are not back for the hearing, the case will likely be dropped by the state.

“There is no extension unless [the court has] a date within the [legal] timeframe,” Coleman said.

Cook County prosecutors have seen a “slow, steady uptick” in so-called no-labs over the past year, according to Coleman. “It’s increasing. It’s definitely gone up.”

After dismissal, the state still has the option to seek an indictment from a grand jury “if it’s appropriate,” Coleman said. But such action is rare. For the vast majority of thousands of narcotics defendants last year, dismissal due to “no labs” was a free pass that put them back on the streets without consequences. 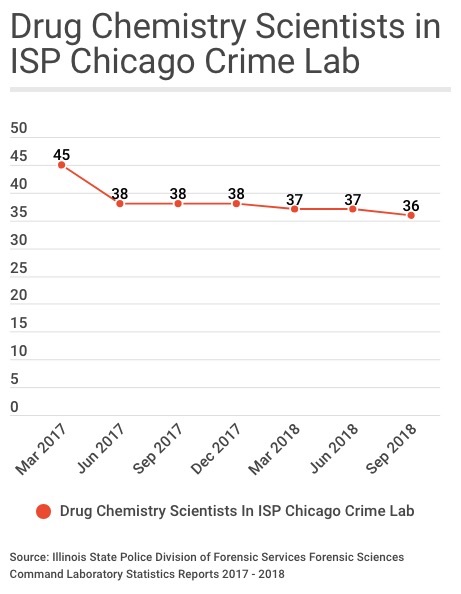 What’s driving the increase in “no labs?” The ISP wouldn’t say. But sources within the criminal justice system pointed to an obvious problem: The number of “drug chemistry scientists” assigned to the Chicago crime lab plummeted from 45 in March 2017 to 38 just three months later. Since then, not one new drug scientist has been added to the laboratory, according to ISP documents. At the end of September last year, 36 scientists remained in the drug testing unit.

And the remaining scientists are being slowed by a time-consuming new report procedure, according to a source.

Coleman, the head of Cook County’s narcotics prosecution team, said her office notifies the ISP lab when a high-priority case comes along so lab results can be expedited. “They’ve been easy to work with on that,” she said.

The 20th (Lincoln) Police District was so proud of a narcotics bust by one of its tactical units last month, the officers tweeted a photo of the cash and drugs that they seized.

“2063 Team makes a key traffic stop this weekend of a known criminal street gang member on 1100 N blk of Winona, offender charged with this tan heroin, crack cocaine, powder cocaine, ecstasy and amphetamines packaged for sales, plus nearly 1K cash in what appears to be proceeds.”

On Jan. 3rd, the state was forced to drop all charges because the lab results had not come back in time for two separate probable cause hearings in the case. Burrell went free.

A 49-year-old West Side man had a similar experience last Thursday morning in the Skokie courthouse.

Tony Johnson had been in custody since Dec. 12th, charged with soliciting unlawful business and manufacture-delivery of heroin in one case and narcotics possession in a second case.

Johnson, joked the assistant state’s attorney, “is a winner on both of them.” The state labs had not come back, and all charges were dropped.

Of the seventeen drug cases that were missing lab results in Skokie court last Thursday morning, nine cases were dropped, and eight were continued for later this month. If ISP lab results aren’t available by the second appearance, those defendants will also “win.”

“Who’s ready for some no labs?”

Frequently stuck in the middle of the laboratory report problem are the Chicago cops who make narcotics arrests. The officers are required to show up to testify in a probable cause hearing. But if the lab results aren’t ready, they are sent home.

At 9 a.m. last Thursday, about ten cops—mostly from Chicago—sat in the jury box of Courtroom 105 in Skokie. A couple of minutes later, county prosecutors walked into court together, led by a man who pushed a plastic cart filled with manilla case files.

“OK,” he said, bringing the cart to a stop in front of the jury box. “Who’s ready for some no-labs?”

One-by-one the officers who were there for narcotics cases were all sent home. More officers arrived for the second court call at 10:30 a.m. They were also sent on their way.

Chicago police directives instruct the city’s cops to check an electronic database for the status of lab results in their court cases. It’s their responsibility to “determine the status of the analysis” if the lab results are not available four days before court.

Like other county courthouses, the Skokie branch has a phone line that officers can call on the day of their scheduled appearance to check on the status of a case. But, according to a source, the Skokie phone line does not begin operating until 8:30 a.m., an hour later than other branches. “That’s not enough time if you’re due in court at 9 o’clock,” the source said.

And officers surely don’t want to make the mistake of not being at the hearing if the lab results just happened to arrive on time.

Chicago cops who fail to appear in court “are subject to Summary Punishment,” according to the department’s directives. “The penalty is based upon the affected member’s summary punishment history and complimentary history for the twelve months preceding the date of the current transgression,” a police spokesman said.

Toward the end of Thursday’s three-hour court call in Skokie, deputies led a prisoner into court from a secure back room. The prosecutor, public defender, and Judge Anjana Hansen quickly went through the same routine they had already performed for nearly a dozen other defendants that morning.

“This,” the prosecutor said, “is a second-time no-lab.”

It all happened so quickly, the defendant had to ask what happened.

“Your case is dismissed,” the public defender told him.

“Oh, thank you!” the suddenly-freed man said as deputies led him back to the lock-up.

Returning to his post next to the public defender, a deputy cracked a smile and joked, “what’s he thanking you for?
——————–
Original reporting that you’ll see nowhere else. Donate $49 or more to our operating fund, and you’ll receive a year’s worth of exclusive reports and services. Monthly plans from just $5 available.