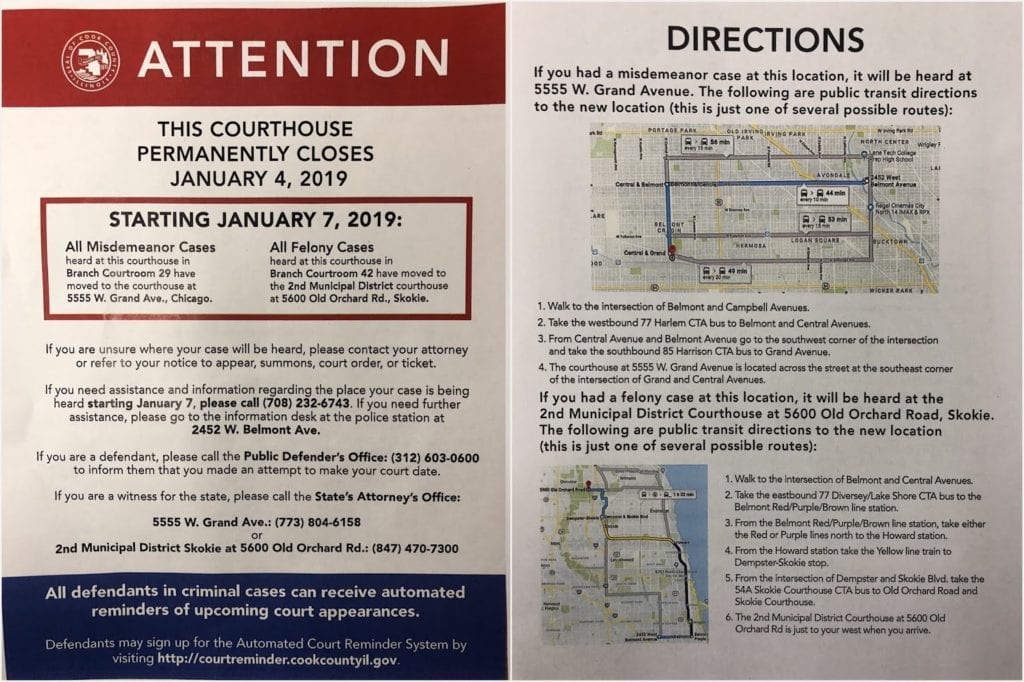 Cook County authorities are gearing up for the closures of two courthouses in Chicago, including a branch location at the intersection of Belmont and Western where many North Side criminal cases have been handled for decades.

After court wraps up on Friday, victims and defendants of misdemeanor crimes in the 18th, 19th, 20th, and 24th police districts will venture to the distant Belmont Cragin neighborhood to have their cases heard. The closure of the Belmont Avenue courthouse and another facility on the South Side is being promoted as a way for the county to save $9.2 million in facility repairs.

Felony preliminary hearings that used to be heard at Belmont will move to the Skokie Courthouse at 5600 Old Orchard Road.

Two handouts have been prepared for people who show up at the wrong courthouse in the coming weeks and months.

Individuals who appear at the shuttered Belmont/Western location by mistake can look forward to a 45-minute bus ride to get to the correct courthouse, according to time estimates on one flyer. The trip to Skokie? 1 hour, 22 minutes, per the hand-out.

Cops assigned to the desk at the attached Area North Police Headquarters have also been given a generous supply of maps and a flyer that tells defendants, witnesses, and victims who to notify about their failure to appear at the correct location.

“If you are defendant, please call the Public Defender’s Office…to inform them that you made an attempt to make your court date,” the second hand-out suggests.


Chief Judge Timothy Evans has ordered that no “failure to appear” warrants be issued during the month of January, according to a source within the court system.

Typically, all criminal charges are dropped if victims fail to appear at an initial court hearing. There’s no word on the fliers about any leniency being shown to them.

There had been talk early in the closure process of transportation vouchers being provided to defendants who show up at the wrong court. There is no mention of vouchers on any of the prepared materials, so it looks like defendants will have to be responsible for themselves. That’s sure to be a change of pace for many.

One small hiccup: The official instructions for getting from Belmont and Western to the Skokie courthouse tells readers that they should “walk to the intersection of Belmont and Central.”  That would be a four-mile hike in the wrong direction. Lost souls should instead walk to Belmont and Campbell, which is across the street from the closing courthouse.
—————–
Support CWBChicago’s reporting team with a monthly or annual subscription. Members-only perks await!