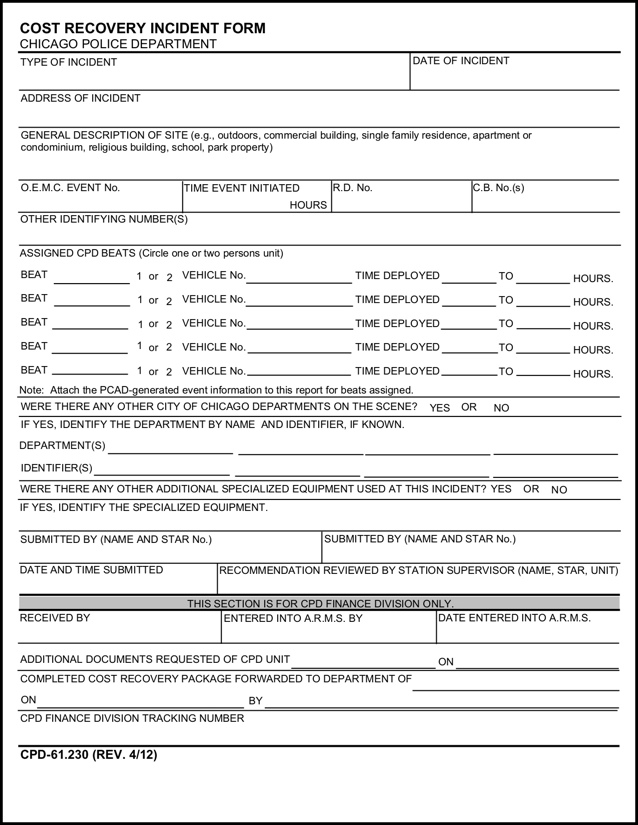 How many times have you heard people say, “they oughta make him pay for the investigation,” since the Jussie Smollett hate crime case began on Jan. 29th?

As it turns out, the Chicago Police Department has a form for that.

Should Smollett be convicted of filing a false police report as charged, a mundane piece of paper known as report #CPD-61.230, the “Cost Recovery Incident Form,” may be the police department’s first step in recovering the costs of its investigation of Smollett’s purported hoax.

Chicago ordinance authorizes the city to seek compensation, for wages and benefits of city personnel, attorneys, costs of equipment and materials, and “any other costs allocable to the provision of services” in a variety of situations.

And the first “situation” on the city’s list of recoverable incidents is “the deployment of police to respond and provide service as a result of a person’s false reporting of a crime.”

Federal authorities are investigating the origin of a white powder-covered threat letter that Smollett received at his TV show’s production facilities on the West Side one week before he reported being brutally attacked in Streeterville.

Whoever mailed that letter is likely to be charged with, among other things,  creating a hoax terroristic threat. And they’ll face a double-whammy.

The city, of course, will be in a position to pursue all costs involved in that case, including the deployment of fire department HAZMAT units.

And 18 U.S. Code § 1038, “False information and hoaxes,” specifically states that—in addition to a potential five years in prison—anyone convicted of the charge “is liable in a civil action to any party incurring expenses incident to any emergency or investigative response to that conduct, for those expenses.”

And the law goes on to say that the sentencing court “shall” order reimbursement, not that it “may.”

But the resolution of any federal case is likely years away.

For now, we know that Smollett is in police custody and is due in bond court at 1:30 this afternoon. The police department has scheduled a press conference to discuss its investigation of his reported hate crime for 9 a.m.

•••
CWBChicago’s previous reporting in the Jussie Smollett case may be found here.
—————–
Our exclusive and original reporting is 100% reader-funded. Please make a contribution to our operating fund or purchase a subscription today.
———-
Email      Facebook       Twitter       YouTube
About CWBChicago 4363 Articles
CWBChicago was created in 2013 by five residents of Wrigleyville and Boystown who had grown disheartened with inaccurate information that was being provided at local Community Policing (CAPS) meetings. Our coverage area has expanded since then to cover Lincoln Park, River North, The Loop, Uptown, and other North Side Areas. But our mission remains unchanged: To provide original public safety reporting with better context and greater detail than mainstream media outlets.
Website Facebook Twitter YouTube