Chicago police are on the lookout for a man who has staked out and then robbed two banks in and near the Loop since mid-January, according to a newly-released community alert.

The man seen in these surveillance photos entered the banks’ lobbies and observed operations before leaving, then returning at a later time to rob the establishments, police said. 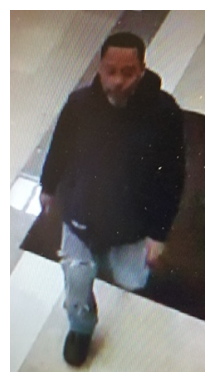 Hold-up notes written on deposit slips have been passed to tellers, warning them that the man has a gun and demanding cash, according to the alert. After receiving money, the man runs out of the bank and escapes in a vehicle.

The man struck most recently at the Lakeside Bank, 1350 South Michigan Avenue, at 3:$7 p.m.  Thursday, according to the FBI. A dye pack hidden in the cash exploded about a half-block from the bank, according to media reports.

Anyone with information about the robber may contact Area Central detectives at 312-747-8384 regarding pattern #P19-1-026 or the FBI Chicago Field Office at 312-421-6700.
—————–
Support CWBChicago’s reporting team with a monthly or annual subscription. Members-only perks await!