UPDATE 6:02PM—Rob Elgas of ABC7 reports that “multiple sources” have said that Smollett and the two persons of interest staged the attack because Smollett’s character was being written out of Empire. The station reports that Smollett “no-showed” for his interview with detectives today. (CPD’s chief spokesperson has denied the station’s reports and a studio exec said Smollett’s character was not being eliminated.)

UPDATE 5:18PM—Charlie De Mar of CBSChicago reports that police raided the home of the two “persons of interest” last night, seizing bleach, a wallet with stamps, a magazine, computers, and more. A relative of the men told De Mar that the two left for Nigeria on the day of the purported attack.
————————
Chicago police today are questioning two persons of interest in the Jussie Smollett hate crime investigation, according to a department spokesperson. Both are African-American. Smollett, who police say “has been questioned throughout” their investigation is also being interrogated, according to TMZ.

The persons of interest were arrested at O’Hare airport on Wednesday night, police said.

Smollett said in an interview aired on Good Morning America today that he believed the two persons of interest seen in the CPD images were the persons who attacked him. “I don’t have any doubt in my mind that that’s them. Never did.”

TMZ reported that the persons of interest are an actor who has appeared with Smollett on Fox television’s Empire and a person who was traveling with the second actor. These individuals are believed to be the “potential persons of interest” who were seen in low-quality images released by Chicago police days after the alleged attack, according to a police spokesperson.

TMZ also reported that police used “rideshare and/or taxicab records” to identify the “persons of interest” and to track their movements on the night of the purported attack.

Given the developments in the case today, CWBChicago is sharing the following tip that we received over a week ago. Parallels being revealed today lend credibility to some of the source’s information.

If the source’s information turns out to be reasonably accurate, it will mean that Chicago police have known the identities of the persons of interest and believed the case to be staged for over a week. 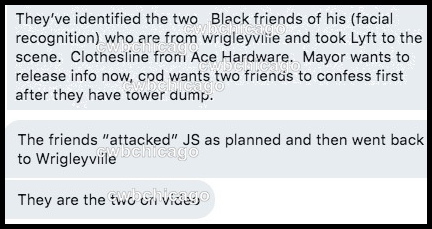 Contacted for comment on details of the tip, Chicago Police Department chief spokesperson Anthony Guglielmi this afternoon said, “Can’t confirm anything. We have active interviews underway.”
Smollett this week turned over “heavily redacted” phone records from the night of the alleged attack. Guglielmi said the submitted documents did not meet the burden of a criminal investigation. Investigators already received Smollett’s complete phone records via a subpoena served on his service provider, according to a source quoted by CWBChicago on Feb. 4.
A source familiar with the records provided by the Empire star states that Smollett downloaded his phone activity into a spreadsheet and then deleted certain phone calls before handing over the records. “He did the [detectives’] job for them because then they only had to focus on the numbers he deleted.”
—————–
Back CWB’s reporting team and we’ll reward you with members-only reports and services all year long. Join HERE for just $49 a year or $5 a month.
———-
Email      Facebook       Twitter       YouTube
About CWBChicago 4360 Articles
CWBChicago was created in 2013 by five residents of Wrigleyville and Boystown who had grown disheartened with inaccurate information that was being provided at local Community Policing (CAPS) meetings. Our coverage area has expanded since then to cover Lincoln Park, River North, The Loop, Uptown, and other North Side Areas. But our mission remains unchanged: To provide original public safety reporting with better context and greater detail than mainstream media outlets.
Website Facebook Twitter YouTube