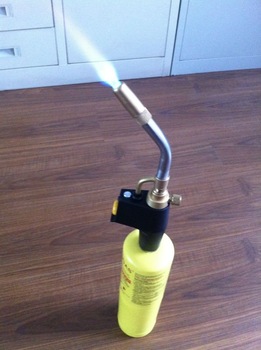 Cops and fire personnel were called to an apartment building in the 500 block of West Melrose at 12:42 a.m. Monday after a 30-year-old man and 21-year-old woman reported that a known acquaintance was trying to burn their apartment door down with a blow torch.

The male victim told police that he had recently received a message from the offender stating that the offender had obtained a “flame thrower,” police said.

When officers arrived on the apartment building’s third floor, they found the blow torch propped against the door with an open flame burning, according to a police spokesperson. The suspect was no longer on the scene.

Arson investigators were working on the case.

A police department source said the suspect is a 33-year-old Boystown resident who may have been involved in last year’s “meth head Jesus” incidents. CWBChicago has confirmed that the name and alias of the suspect being sought for Monday’s fire match the name and Grindr nickname used by the suspect in last year’s incidents.
—————–
Back CWB’s reporting team and we’ll reward you with members-only reports and services all year long. Join HERE for just $49 a year or $5 a month.