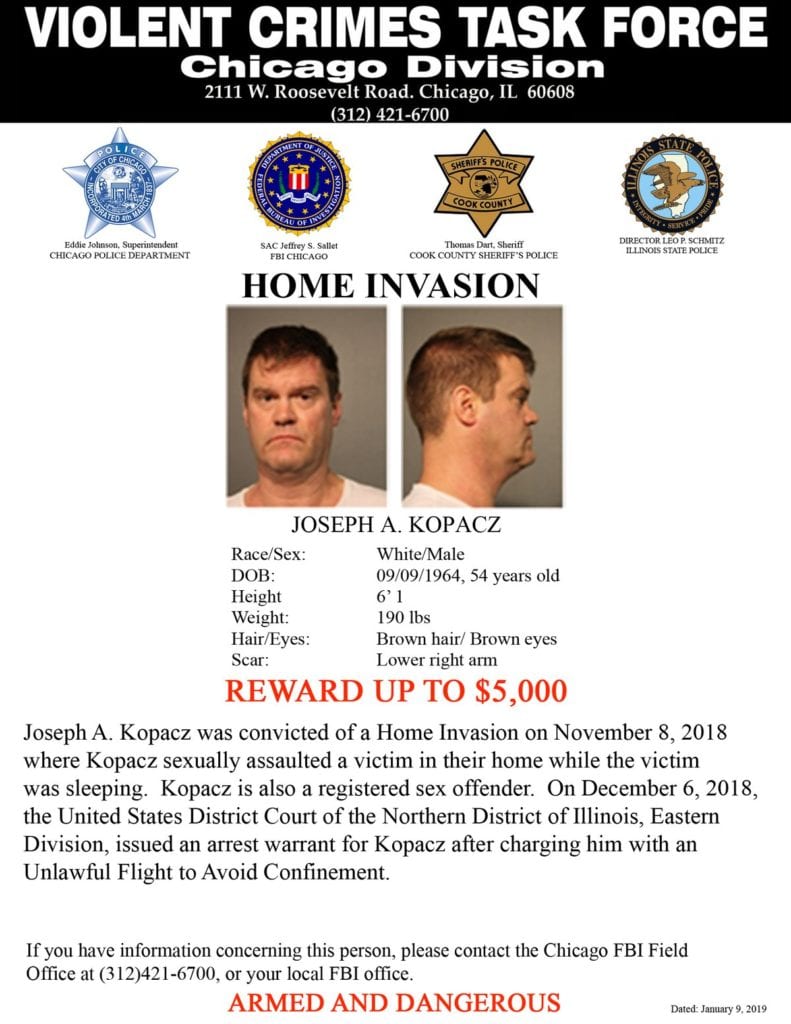 Joseph A. Kopacz, the 54-year-old home improvement contractor and serial sex offender who went on the run as a jury prepared to convict him of fresh home invasion and sexual assault charges in November, has been a very busy man.

CWBChicago this week learned that Kopacz has been evading authorities in two states; is now charged with federal flight to avoid prosecution, and has rolled some of his assets into a Delaware corporation. Now, that corporation is assigning ownership of assets and is attempting to find tenants for Kopacz’s old rental property in Logan Square.

Yet, somehow, authorities have not been able to find him.

Kopacz left a trail of male sexual abuse victims across Wisconsin before he was convicted of entering a Lakeview apartment in 2016 to sexually assault and take photos of a sleeping 23-year-old man.

Despite the serious allegations, Uptown resident Mark Graham posted a $50,000 deposit bond that allowed Kopacz to leave jail while awaiting the outcome of the case. But, as the jury went into deliberations, Kopacz slipped out of the Cook County criminal courthouse at 26th and California. He hasn’t been seen since. And Graham was made personally responsible for paying the rest of Kopacz’s $450,000 bail.

This week, CWBChicago learned that Kopacz may have been planning his escape from justice since his trial began last autumn.

On Jan. 11th, Kopacz made a couple of real estate maneuvers, according to county records.

First, he transferred ownership of his Uptown condo on the 4000 block of North Clarendon from his name to “Kopy Holdings LLC Series A.” And, he assigned power of attorney for the property to Graham. The value of the condo in 2013 was $251,900, records show.

As recently as Tuesday, a listing by “Paul Kopacz” was seeking renters for “Joe’s Apartment” in the West Homer building. That ad has been removed. However, you may now rent the exact same apartment from “Kopy Holdings” on HotPads and RadPad.

Meanwhile, Joseph Kopacz’s Chicago-based home improvement company, JAK Built, is getting mixed reviews lately—including one from a man who claims that “Joe [stole] money from the business and was not reachable.”

Also this week, we learned that federal charges of flight to avoid prosecution were filed against Joseph Kopacz under seal in Chicago on Dec. 6th, about a month after he slipped out of court.

An FBI agent told the court that Graham—the man who posted Kopacz’s bond—heard Kopacz had escaped to Palm Springs, Calif., according to recently-unsealed paperwork. FBI agents went to Palm Springs and spoke with a bartender who identified Joseph Kopacz and confirmed that he had been staying in a local hotel. But Kopacz was gone.

There’s no word on where Joseph Kopacz is now. Maybe he could put his home improvement chops to work at the Wood Floor Company in San Jose.

The FBI is offering a reward of up to $5,000 for information leading directly to Kopacz’s arrest. Anyone with information regarding his whereabouts may contact the FBI’s field office in Los Angeles at 310-477-6565 or Chicago at 312-421-6700.
—————–
Will you help us recover the costs of operating CWBChicago? You can make a contribution or purchase a subscription HERE.