One of the many topics that Cook County State’s Attorney Kim Foxx’s office has regularly avoided since abruptly dropping charges against Jussie Smollett on March 26th is this: Could they point to any other occasions when they flat-out dropped felony false police report charges without requiring the accused to at least plead guilty?

And text messages from Foxx’s top aides released last week show that they were very much aware of a CWBChicago report that found that every other similar Chicago case handled by Foxx ended with a guilty plea and a sentence—usually of probation with formal community service.

The text messages seem to show that after seeing our report, Foxx’s aides decided to only speak in general terms about the outcomes of all Class 4 felonies, regardless of the specific charge.

In one exchange, aides looked for cases “comparable” to Smollett’s, yet they have never issued any for public review. Probably because they couldn’t find any.

As recently as Tuesday evening, Foxx again pointed the curious to her office’s voluminous and generic “data portal” rather than to specifics.

Today, we’ll update you on two pending apples-to-apples cases that we told you about in our original report. And, we’ll introduce you to the first person to be charged with felony filing of a false police report in Chicago since Smollett was charged in February.

We are identifying the defendants in these cases by initials only because we would not ordinarily be reporting about their proceedings and it doesn’t seem fair to drag them into the spotlight.

To qualify for “apples-to-apples” comparison with Smollett, defendants:

• must be charged with exactly the same crime as Smollett

• must not be charged with any additional crimes

• must not have any previous criminal convictions in Cook County

• must be accused of filing the allegedly false report in Chicago

On March 27, we told you about JV, a 53-year-old man that police say falsely reported being tied up, battered, and robbed in the manager’s office of a restaurant that he manages. His case has been dragging on for over a year.

About two weeks before Smollett’s case was resolved, an assistant state’s attorney confided that she did not think the state could win its case because video evidence presented by police was inconclusive. JV also says the state has ignored exculpatory evidence—like the fact that police located his stolen wallet three blocks from where he was found tied up.

When their case fell apart, did the state offer to drop all charges against JV? Absolutely not. Instead, the state said if JV pleads guilty, they will agree to a sentence of two years probation plus community service.

In court again recently, the state stood by its offer, still failing to give JV the “Smollett Deal” that “all defendants” are supposedly offered.

DB, a 25-year-old CTA worker who’s accused of filing a false carjacking report, has not had a court date since our last report. His next appearance in the 13-month-old case is in early May.

SS, a 30-year-old woman, is charged with one felony count of disorderly conduct-false report of offense. She has no previous convictions in Chicago.

Around 3 a.m. last Wednesday, police pulled over SS’s boyfriend for a traffic violation as he drove her car on the South Side. As police took the boyfriend into custody for another matter, he told officers that he had SS on a video call and he’d like them to speak with her, so they didn’t impound her car. SS confirmed that the boyfriend had permission to use her car and made arrangements for SS to pick her car up at the nearby police station later in the morning.

While processing the boyfriend, police ran a routine check on SS’s car and discovered that it had been reported stolen 20 minutes after police arranged for her to pick the vehicle up at the station. Police say that after ending the video call, SS called 911 and falsely reported that she had left the keys in her vehicle in front of her home and someone took it.

SS was arrested when she arrived at the police station to claim her car. It’s still a little early in the process to know if prosecutors will offer her a “Smollett Deal.” But she probably shouldn’t hold her breath.

Suburban Cook County Judge Marc Martin tore into a prosecutor from Kim Foxx’s office during a recent hearing. And he had the “Smollett Deal” on his mind.

Well, [the defendant] Ms. Clark is not a movie star, she doesn’t have a high-price lawyer, although, her lawyer’s very good. And this smells, big time. I didn’t create this mess, your office created this mess. And your explanation is unsatisfactory to this Court. She’s being treated differently.

There’s no publicity on this case. She doesn’t have Mark Geragos as her lawyer or Ron Safer or Judge Brown. It’s not right. And I proceed in this matter, you’re just digging yourselves further in a hole. Press gets ahold of this, it’ll be in a newspaper. Why is Ms. Clark being treated differently than Mr. Smollett?

And why is JV? And why is DB? And why have all of these other ordinary people been treated differently than Mr. Smollett: 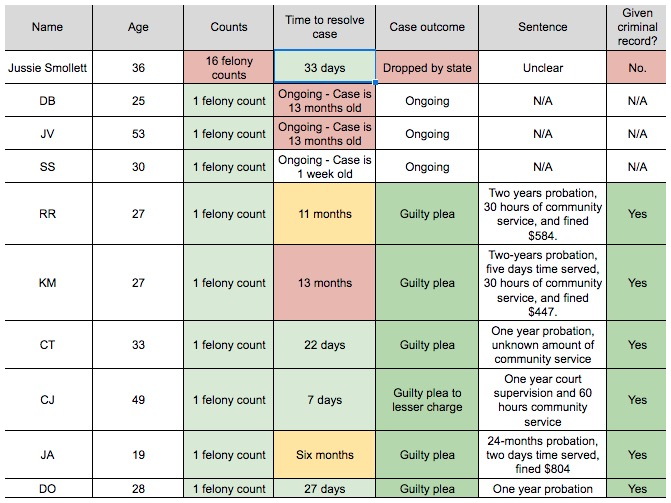