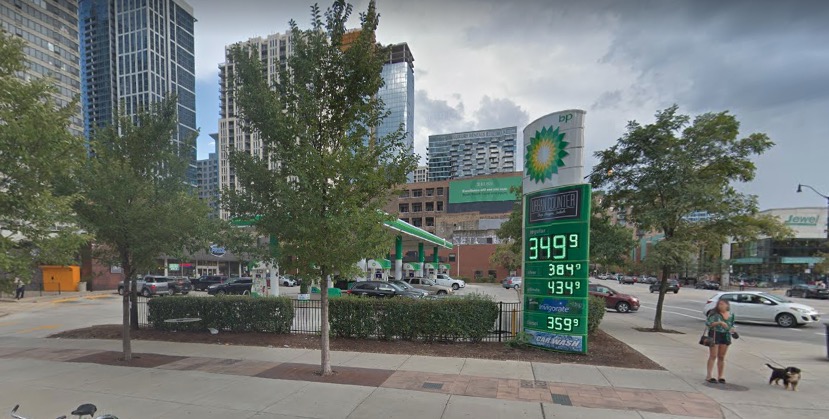 A woman told police that she was pushed by a man who stole her car as she prepared to fill it with gas at the BP service station, 1221 South Wabash, near the Roosevelt Red Line station. The incident is at least the third carjacking or carjacking attempt in the downtown area since Monday.

The victim was getting ready to fill up her car when a man in his late teens pushed the woman, then jumped into the driver’s seat and sped away with her black Kia around 1:45 p.m. on Tuesday.

Minutes later, the car was found abandoned with its engine running in the northbound lanes of Michigan Avenue near Balboa. Witnesses told police that two men in their late teens jumped from the car with a woman’s purse and climbed into a nearby silver Toyota that fled the scene with a third person driving.

The two primary offenders were described as black males in their late teens. One was wearing a black hoodie. The Toyota, which has significant damage to its passenger side, was last seen westbound on Harrison from Michigan, according to a witness.

Tuesday’s carjacking bears some resemblances to a pair of attempted auto thefts that were reported in River North and Streeterville on Monday afternoon:

• A would-be thief jumped into the driver’s seat of a man’s car as he was putting items in the vehicle’s trunk in the 1100 block of North State Street shortly after 2 p.m., police said. A bystander yelled out to the car’s owner, who managed to pull the offender out of his car before the thief could drive away

• About 15 minutes later, a woman was elbowed in the face by a man who tried to steal her car from a valet stand in the 300 block of East Erie. Bystanders intervened, and the offender escaped in a waiting vehicle.

Police said the thieves were getting around in a silver 2013 Chevrolet, possibly a Malibu, with darkened windows and a license plate that begins with AE266. The passenger-side brake light does not work. The driver and the man who tried to take the vehicles are both black men in their late teens, or early 20’s who stood about 5’6” tall and wore plain black jackets, according to witnesses.

—————–
Will you help us recover the costs of operating CWBChicago? You can make a contribution or purchase a subscription HERE.
———-
Email      Facebook       Twitter       YouTube
About CWBChicago 4363 Articles
CWBChicago was created in 2013 by five residents of Wrigleyville and Boystown who had grown disheartened with inaccurate information that was being provided at local Community Policing (CAPS) meetings. Our coverage area has expanded since then to cover Lincoln Park, River North, The Loop, Uptown, and other North Side Areas. But our mission remains unchanged: To provide original public safety reporting with better context and greater detail than mainstream media outlets.
Website Facebook Twitter YouTube