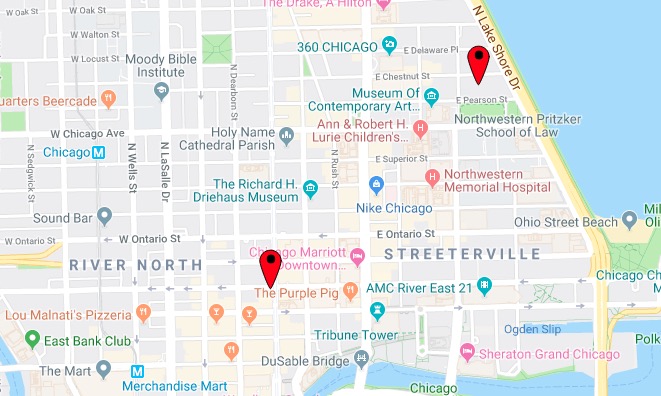 At least two women have reported being robbed in River North and nearby Streeterville since Tuesday evening:

• Police said a woman was knocked to the ground and robbed of her purse as she walked in the 200 block of East Pearson around 8:35 p.m. on Tuesday. The offender then climbed into a white car that sped away eastbound on Pearson. Police said the robber is a black man who wore a white hoodie.

• A woman reported that two men battered her and tried to take her purse as she stood on the Grand Red Line platform, 521 North State, around 12:15 a.m. on Thursday. The victim chased the offenders to street level and was able to get her purse returned, a witness said.

Police described the offenders as two young black men who stand 6’3” to 6’5” tall. One wore a white polo shirt with black pants and black shoes. The other wore all black.

On the evening of May 23, a woman told police that she was robbed by a man and woman as she walked down the stairs to board a train at the Jackson Red Line station, 247 South State, around 8 p.m. The victim said the couple approached her from behind, punched her repeatedly, and then took her backpack. She said the robbers then fled southbound on State Street.

Police said the offenders were a black male and a black female between 16-20 years old. The man wore stone wash jeans and the woman had long braids.