Five adults are facing felony charges after a brawl inside a McDonald’s near the Magnificent Mile early Sunday left a man unconscious and bleeding on the restaurant floor.

Police said three men and two women are each charged with one felony count of aggravated battery causing great bodily harm and misdemeanor battery in the case. 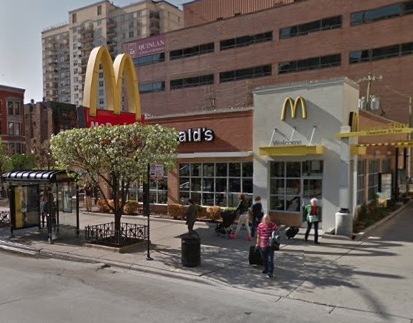 Charged are 24-year-old Itzel Gallegos; 19-year-old Jacqueline Gallegos; 23-year-old Osvaldo Lara; 24-year-old Obed Romo; and 19-year-old Angel Salgado, according to a police spokesperson. The five are due in bond court on Monday afternoon.

The group was allegedly armed with pepper spray and a knife when they began throwing things inside the restaurant at 10 East Chicago around 4 a.m.

A 37-year-old man received a three-inch laceration on his head, was knocked unconscious, and suffered a seizure on the restaurant floor, a witness said. That man was transported to Northwestern Memorial Hospital.

Officers who were responding to 911 calls about the incident spotted a vehicle that matched the description of one that was used by the attackers to flee the scene. They pulled the car over and its five occupants were detained and subsequently identified, according to police said.