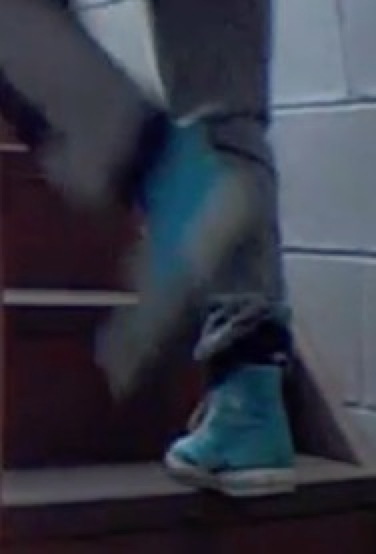 A wisecracking Lakeview burglar took time to give the “thumbs up” to a surveillance camera as he made his way toward his next break-in this weekend. But the camera may get the last laugh as it captured crystal-clear images of the thief’s face and caught a glimpse of his distinctive baby blue hi-tops.

Video of the prowler was sent to CWB by the victim who said she was out of town when the burglar struck her condo this weekend near Sheffield and Barry.

The man kicked in the back door of the woman’s home at 6:08 Sunday morning and left nine minutes later, the victim said.

“Every drawer, dresser, and closet was ransacked and valuables were stolen, including all my jewelry,” she told us. “Please help me find this subject or at least help others that might run into him so they know they should protect themselves.”

Video not loading? Click here.
—————–
Support CWBChicago’s reporting team with a monthly or annual subscription. Members-only perks await!
———-
Email      Facebook       Twitter       YouTube
About CWBChicago 4360 Articles
CWBChicago was created in 2013 by five residents of Wrigleyville and Boystown who had grown disheartened with inaccurate information that was being provided at local Community Policing (CAPS) meetings. Our coverage area has expanded since then to cover Lincoln Park, River North, The Loop, Uptown, and other North Side Areas. But our mission remains unchanged: To provide original public safety reporting with better context and greater detail than mainstream media outlets.
Website Facebook Twitter YouTube