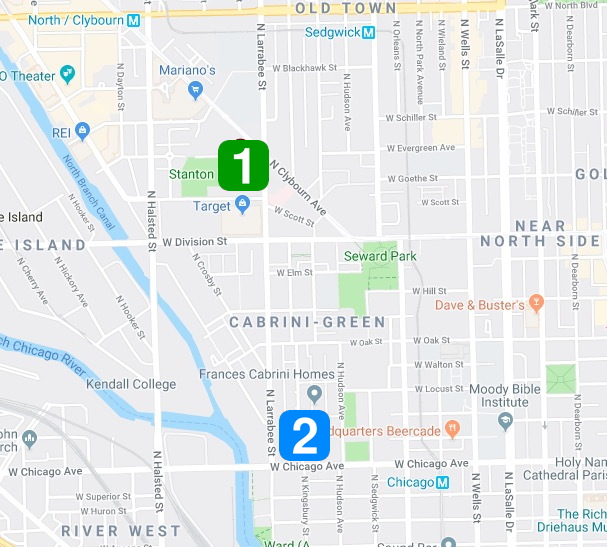 Update: Police on Sunday afternoon said the 41-year-old man who was appeared to have been shot in the Stanton Park incident was actually shot in a separate incident on the 1100 block of North Cambridge around 12:55 a.m.

Our original report follows.
—-
Six people were shot in two separate incidents in the River North neighborhood overnight, police said. Investigators believe the second shooting was retaliation for the first.

Police said none of the victims has been cooperative with police and investigators have no descriptions of any suspects. No one is in custody.

Four of the victims were injured when shots rang out as a large group of people fought in Stanton Park, 618 West Scott, at 12:56 a.m., police said. All of the victims are “known to police,” the department said in a statement.

Police said a 22-year-old man with a gunshot wound to his chest is also in critical condition at Northwestern. A 37-year-old man who was shot in the lower back was stabilized at the same hospital.

An evidence technician was later seen recovering shell casings and a gun holster at the shooting scene. On the opposite side of the park, a woman told police that a bullet flew through her third-floor apartment window.

Twenty minutes after the Stanton Park incident, two more men were shot in the 800 block of North Cambridge, police said. Investigators believe the shootings were payback for the earlier shootings.

Both victims on Cambridge told police that they were on the sidewalk when they heard gunfire and realized that they had been shot. Once again, police said both men are “known” to the department.

Twelve people have been shot in River North so far this year. City data shows that six people were shot in the neighborhood during all of 2015; eight during 2016; six during 2017; and sixteen during all of last year.