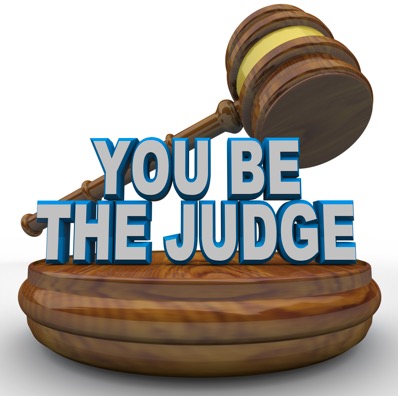 Cook County’s “affordable bail” program is sending some alleged gun offender back onto the streets just hours after they are arrested, according to Anthony Guglielmi, the Chicago Police Department’s chief spokesman.

For the past few weeks, Guglielmi has been tweeting about the number of people the department arrested for gun violations over the previous weekend—and including details about how many of them had already returned to the streets thanks to recognizance and low bonds.

“We are merely reporting court outcomes, but stopping short of taking any position as that is the justice system,” Guglielmi tweeted Thursday. “It’s the public that needs to take a position.”

CWBChicago has been reporting “affordable bail” details for violent and gun offenders for years. Now, inspired by Guglielmi, we’re going to go a step further and let you pretend to be the judge.

It’s a new series that we’re calling, “You Be The Judge.”

We’ll give you the allegations that prosecutors laid out in court. We’ll give you the accused person’s criminal background. Then, see how close you can come to guessing the actual bail that was set in the case by a Cook County Judge.

Police in the Austin neighborhood said they were at a loud party disturbance in the street last Wednesday night when one officer allegedly saw a black object sticking out of McKay’s waistband. McKay spotted the officers’ car and started stuffing the object deeper into his pants, according to the police.

McKay reportedly did not respond when officers asked if he had a gun. Instead, he began reaching into the right side of his pants, police said.

One of the cops stopped him from doing that and then noticed an L-shaped bulge on McKay’s right thigh that turned out to be a loaded 40-caliber handgun, according to the arrest report.

Prosecutors charged McKay with one felony count of unlawful possession of a firearm by a felon.

Here are some details for your consideration, based on court files:

McKay has never failed to appear for a court date. The court’s Pre-trial Services Division recommended that he be put on electronic monitoring if he’s released. He and his family say they have zero cash available for bail.

OK. You be the judge. How much should McKay be required to put down to secure his freedom and ensure that he will return for his court dates while not putting the community at undue risk? Keep that number in mind while we tell you what actually happened:

Will Lee, a Chicago Tribune reporter who regularly live tweets from weekend bond court, has told his followers that Willis frequently states his personal rule of thumb for setting bail in gun cases: “He’s inclined to give [a recognizance bond] for a gun charge ONLY if the person lacks a criminal background and if they work consistently,” Lee tweeted on Sunday. “For the second gun case, they’ll receive a cash bond and for the third, no bail.”

For McKay, who has two gun convictions and a robbery conviction, Willis set bail at….$5,000. McKay will need to put down a 10% deposit of $500 to go free.  Willis also ordered him to go on electronic monitoring if he is released.

Some details that Willis did not know:

• McKay’s 2008 robbery conviction involved an armed carjacking. Prosecutors reduced the charge to “ordinary” robbery as part of a plea deal.

• In 2012, McKay’s second gun case also included allegations that he fired the weapon. Prosecutors dropped the weapon discharge count and seven other weapons charges in a plea deal.

• The 2016 drug possession charge started as allegations of manufacture-delivery of fentanyl, but, again, prosecutors pleaded that down to possession.