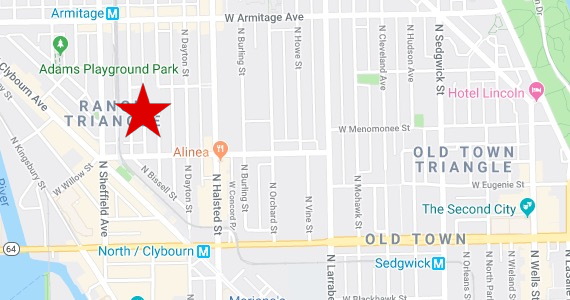 A Lincoln Park woman was confronted in her garage by an armed man who battered her, robbed her, and stole her car Saturday morning, according to a CPD spokesperson. The offender remains at large.

Police said the victim, 56, was parking her car in her garage on the 1800 block of North Fremont when the man approached her with a knife at 8:38 a.m. He demanded her valuables and forced her from the car, police said. A struggle ensued and the woman was thrown to the ground and choked by the offender who then entered the vehicle and drove away northbound.

The offender initially ordered the victim to close the garage door behind them before initiating the robbery, according to an email shared with neighbors by a person familiar with the incident.

The victim suffered minor injuries to her legs and arms, but declined transportation to a hospital, police said.

Taken was a silver 2019 Honda Fit bearing a license plate that begins with “AZ77.” The car will have damage on its roof because the garage door was going down as the robber backed out. He also struck the garage, so the car may have additional damage on its back end.

The offender is described as a black man between 20- and 35-years-old who stands about 5’10” tall and weighs 175 to 215 pounds, police said. He had bushy hair, carried a backpack, and was wearing dark jeans, a dark t-shirt.