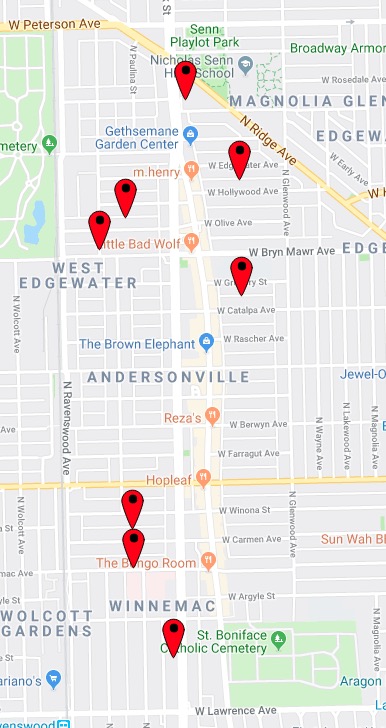 A band of catalytic converter thieves has struck at least eight times in the past week on side streets near Ashland Avenue in the Uptown, Edgewater, and Andersonville neighborhoods, police say.

Thieves love stealing catalytic converters from the undersides of cars because the parts contain expensive metals, including platinum and palladium that can demand payments of $100 to $200 at scrap yards.

Police listed eight specific incidents since July 11th on the North Side in a community alert. All of the thefts took place within a quarter-mile of Ashland Avenue.

The eighth incident took place sometime between July 11th and July 17th on the 1400 block of West Catalpa, police said.

SUVs are often targeted because their high ground clearance makes it easier to access the undercarriage with a saw. Victims rarely know that their catalytic converter has been stolen until they start their car. That’s when they’ll be startled by a loud, roaring sound of their freshly-unmuffled engine.

• Always park your car in a garage, if available. If not, consider parking with the driver’s side next to the curb (this makes accessing the converter a little more difficult).

Anyone with information about the latest rash of thefts may contact Area North detectives at 312-744-8263 about pattern number P19-N-188.