UPDATE: Chicago police said this morning that the man has been pronounced dead.
————–
A 42-year-old man is in critical condition after being shot on a Rogers Park street corner Monday evening. No one is in custody.

Police said the department is familiar with the victim, who was standing outside of 7575 North Rogers when someone fired shots from inside a white BMW at 9:17 p.m. The man transported to St. Francis Hospital with gunshot wounds to his left thigh, abdomen, and left buttock, according to police.

The BMW was last seen heading eastbound on Rogers, then turning north onto Greenview. 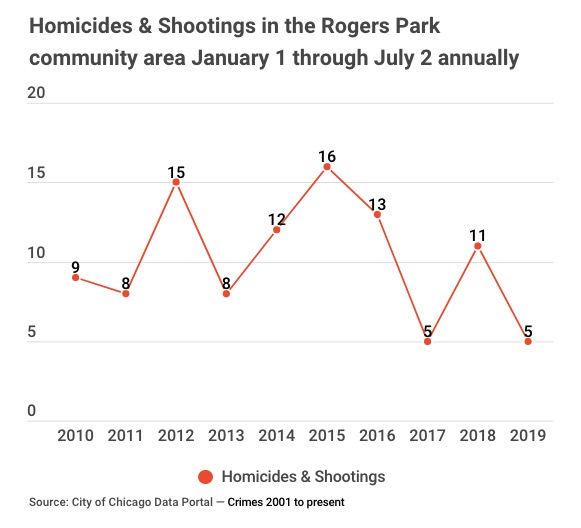 Monday’s incident was the second shooting in four days for the Far North Side neighborhood. Quintin Brown, 17, was shot to death at 2:15 p.m. last Thursday in the 6900 block of North Glenwood.

But year-to-date murders and shootings in Rogers Park are at ten-year lows, according to city data. Five people were murdered or shot in the neighborhood through July 1st this year. That ties 2017 for the lowest count since at least 2010. By comparison, ten people were killed or shot in RP during the same time last year and thirteen cases were recorded in 2016.
—————–
Will you help us recover the costs of operating CWBChicago? You can make a contribution or purchase a subscription HERE.
———-
Email      Facebook       Twitter       YouTube
About CWBChicago 4360 Articles
CWBChicago was created in 2013 by five residents of Wrigleyville and Boystown who had grown disheartened with inaccurate information that was being provided at local Community Policing (CAPS) meetings. Our coverage area has expanded since then to cover Lincoln Park, River North, The Loop, Uptown, and other North Side Areas. But our mission remains unchanged: To provide original public safety reporting with better context and greater detail than mainstream media outlets.
Website Facebook Twitter YouTube