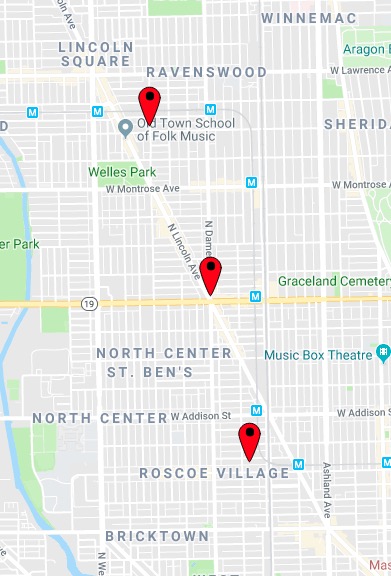 At least three women were mugged by a pair of thieves Monday afternoon in the North Center, Lincoln Square, and Roscoe Village neighborhoods, according to police records and a witnesses who wrote to CWBChicago. No one is in custody.

The first victim was pushed to the ground by two males who tried to take her phone near the intersection of Lincoln Avenue and Irving Park Road around 3:30 p.m. A witness said the woman fought back and the offenders ran away southbound. The victim apparently left the scene before police arrived and no formal report was immediately found.

About 45 minutes later, two males robbed a woman of her phone near Leavitt and Wilson in Lincoln Square. The offenders fled northbound through an alley, police said.

Then, a CWBChicago reader saw a woman get robbed of her phone on the 1800 block of West Roscoe around 5:15 p.m. “It happened on the south side of Roscoe right during the evening rush,” the man said. “She didn’t want to call the police.” Again, no formal report was immediately found by CPD.

Witnesses described the robbers as two black male teenagers. One wore a white sweatshirt and the other wore a green sweatshirt, according to descriptions provided to police and CWBChicago.