It’s been a year since the operators of Chicago’s Divvy bike program took action to address widespread theft of the system’s blue bicycles from docking stations across the city. 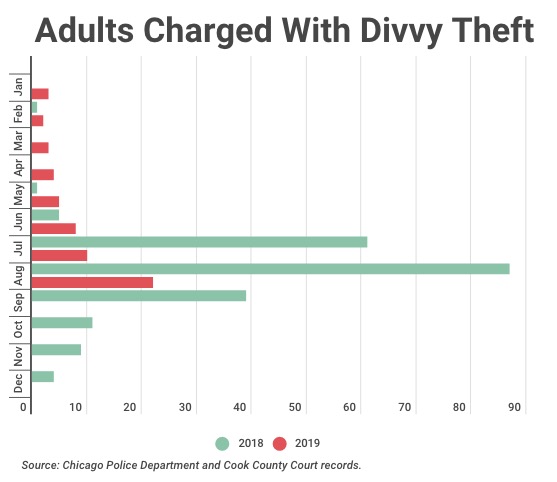 Divvy said they reinstalled a security device that had been removed from stations to make it easier for riders to dock bicycles at the end of their ride. Without the inconvenient device, seemingly-locked Divvy bikes could be taken from docking stations by climbing on, pedaling, and rocking the handlebars from side to side.

Last August, during the peak of the theft wave, at least 87 adults were arrested in Chicago and charged with theft of lost or mislaid property for riding stolen Divvy bikes.

That number fell to at least 39 arrests in September 2018 and about eleven in October, according to police and court records monitored by CWBChicago. 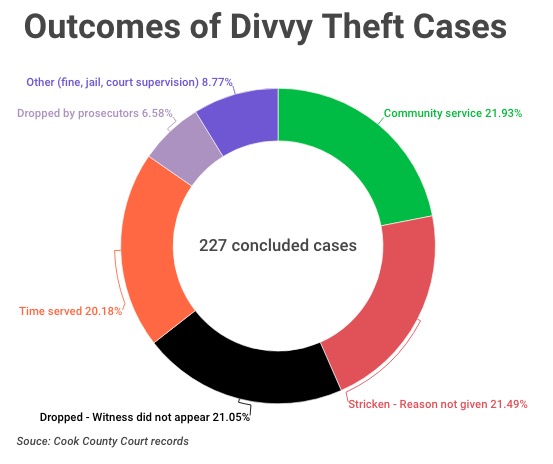 Far fewer adults have been charged with having stolen Divvy bikes this year. But the number of arrests is still significantly higher than in the months before last year’s theft wave.

Last month, at least 22 adults were charged with theft of lost or mislaid Divvy bikes. That’s a 75% reduction from last August’s peak. Yet, it’s a significant increase from 2017— a year for which we could not find a single case of Divvy theft resulting in an arrest.

Precisely why Divvy theft arrests continue at elevated levels is not clear.

About a quarter of the stolen Divvy bikes recovered from adults this year were taken from docking stations, according to police reports reviewed by CWBChicago. It’s not clear if the bikes were stolen by thieves who exploited last year’s security weakness or if the Divvies were improperly docked by users. 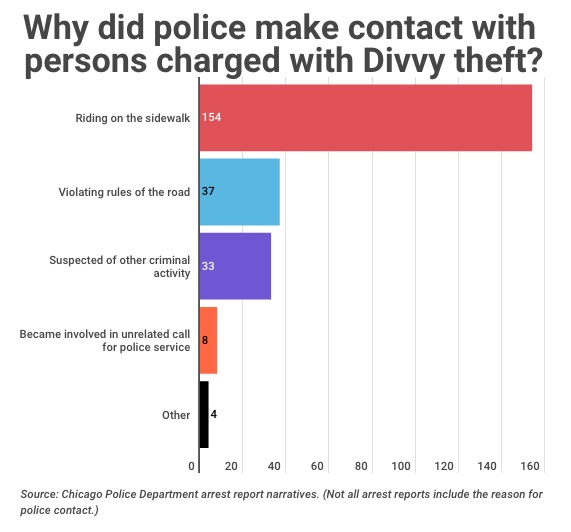 Two Divvy users who were the last to use bikes before they were stolen from docking stations spoke with CWBChicago this summer. Both said they are confident their bikes were properly docked upon return.

Other police reports indicate that several bikes recovered by cops this year were taken from Divvy’s service trucks.

One likely reason for the ongoing arrest of alleged Divvy thieves is that the 2018 spree made police aware of the potential for the rideshare bikes to be stolen.

Asked about the continued arrests, a Chicago Department of Transportation spokesperson said, “We are proud of the investments and improvements made to Divvy that have curtailed thefts. Chicago’s bikeshare network is strong and on its way to a $50 million citywide expansion with over 10,000 brand new bikes.”

Since February 2018, at least 277 adults have been charged with theft of lost or mislaid Divvy bikes, according to CWBChicago research. Police and court records are not available for juvenile arrests.

The average accused Divvy thief has been arrested in Chicago five times since 2014, according to Chicago Police Department records. Their average age is 33-years-old.

As for the bikes, the average stolen Divvy recovered by  police has been missing for 32 days.

Among bikes known to have been taken from docking stations, the most popular station for theft was the Divvy rack at Indiana and Roosevelt, according to CPD reports. Runners-up are stations at Prairie and Garfield; Jeffery and 67th; Halsted and 63rd; and Central Park at Ogden.