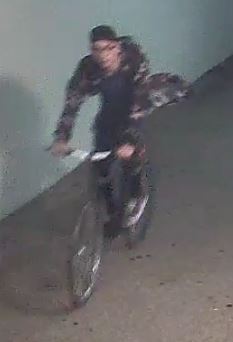 Police have released a surveillance image of a man who allegedly tried to sexually assault a woman in the Streeterville neighborhood early Tuesday.

The victim was in the 200 block of East Pearson when the offender approached on a mountain bike and “made inappropriate physical contact” with her between 3:20 a.m. and 5:12 a.m., according to an alert issued by Area North detectives. Police said the man then fled toward the lake on his bicycle.

Investigators are looking for a man between 20- and 25-years-old with an olive complexion who stands 5’6” to 5’8” tall and weighs 140 to 160 pounds. He was wearing a black baseball cap turned backward, black goggles or glasses, a multi-colored jacket, dark pants with socks pulled over the cuffs, reflective stripes around his calves, and dark gym shoes with white soles and white laces, police said.

Police are encouraging area residents to inform their neighbors about the incident. Tips may be shared with detectives at 312-747-8380. Refer to case number JC-427081.