Three Chicago police officers are being recognized for helping to apprehend a Lincoln Park robbery crew this summer.

Between early June and early July, dozens of robberies targeting women and thefts of idling cars were reported in the area between Fullerton Avenue, Diversey Parkway, Clark Street, and Lakeview Avenue. Police linked the crimes to a small crew of robbers, but apprehending the group proved challenging.

That all changed on June 27.

That evening, a woman parked her car in the 2300 block of North Clark Street and went into a nearby business after tucking her car keys into her back pocket. According to prosecutors, two 15-year-old boys followed her into the store while a 19-year-old woman named Precious Taylor held the business; door open.

One of the boys stuck his hand into her pocket to get the keys and knocked her to the floor. The victim fought off the teen, but the second juvenile jumped in to help fight. After getting the woman’s keys, the trio ran to her Audi Q5 and climbed inside.

Taylor allegedly locked the car’s doors as the woman tried to open the passenger door. Prosecutors said that the woman had to jump back to avoid being run over as the crew sped away with her car.

Officers Jesus Longoria, Joseph Pentimone, and Richard Rodriguez began a grid search for the vehicle after responding officers sent out a description of the robbers and the victim’s car.

They soon found the woman’s Audi traveling south on Lake Shore Drive near Chicago Avenue. The stolen Audi crashed as the officers closed in, and three people ran from the car. Longoria, Pentimone, and Rodriguez chased them and, with the help of other cops, took all three into custody, the Chicago Police Memorial Foundation said in a press release that recognized them as the organization’s Officers of the Month.

Perhaps not coincidentally, the wave of robberies and auto thefts that had plagued the neighborhood ended soon after the trio was arrested.

In early July, Ald. Michele Smith (43rd) sent out a plea for residents and businesses to search for video of a dozen robberies to help police build cases. Smith recently retired.

A law enforcement source told CWBChicago that the 15-year-olds are two of the three suspects in a series of at least 12 robberies in which women were targeted on the streets. Police believe the crew has also stolen dozens of cars from the same area and nearby Lakeview, likely starting last year.

The source said police had recovered more than 20 cars stolen from Lakeview and Lincoln Park near one of the 15-year-olds’ suburban home. 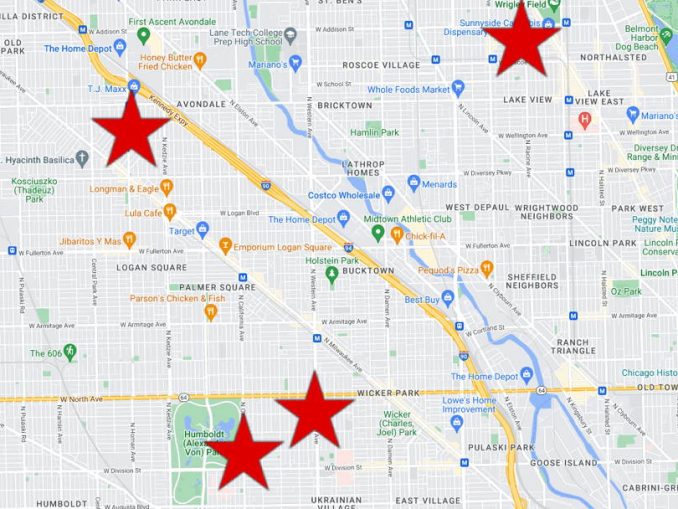