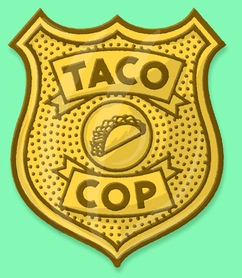 At least one offender is in custody after an attempted robbery at the Sam Adams Lakeview Taco Fest yesterday afternoon.

A victim reported that a man and a woman grabbed him and tried to take his cell phone near Southport and Cornelia about 4:45PM. Needless to say, there were plenty of witnesses on-hand.

Responding officers placed a woman into custody at 3413 N. Southport after she was positively identified by witnesses as being involved.

CWB Chicago has not been able to confirm the status of the other offender, who is described as a black man in a white t-shirt, who stands about 6-feet tall and weighs about 200 pounds.

An off-duty police officer detained a man for stealing a woman’s purse near Cornelia and Marshfield around 2:45PM on Friday afternoon.

CWB has learned that the suspect, who originally claimed to be a juvenile, is actually 22-years-old.

An ambulance was called to assist the victim. Robbery charges are pending.