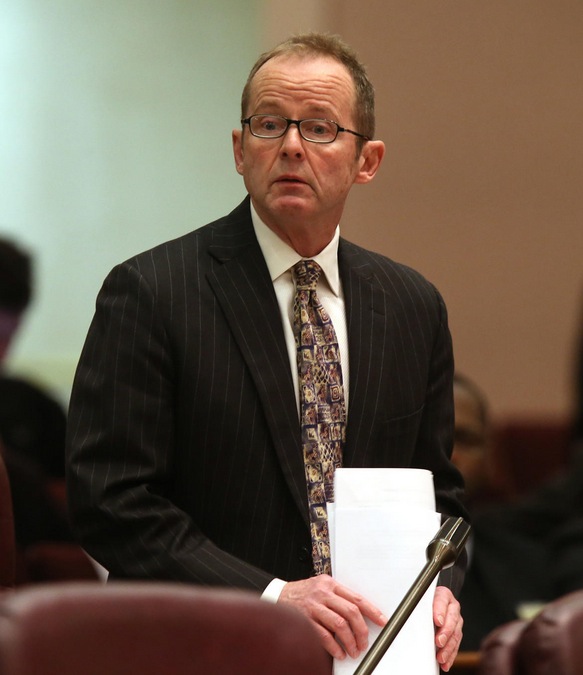 “After much persistence,” Rosinus writes in a follow-up letter to the alderman today, “the only correspondence I have received was a two sentence email from your Chief of Staff, Bennett Lawson, who informed me that he would work with you to ‘prepare a response.’…I am still waiting.”

Last night, Rosinus told us that his letters are “about holding people accountable and all I continue to hear and see are excuses and no solutions. I’m not interested in hearing about WHAT crime is happening but WHAT we are doing to reduce and eliminate the violence. “

“After the Labor Day weekend, the Alderman posted a note on his website and Facebook page that was long on words but short on actual initiatives,” Rosinus said. “It was after I read his statement that I decided to write him a letter posing four very simple, yet important, questions.”

Since Rosinus’ first letter to Tunney, the 44th ward has racked up an incredible 12 additional robberies—a pace of nearly one per day—with nine of the attacks taking place during non-overnight hours.

Here’s is the letter that Rosinus sent to Ald. Tunney on September 10:


I am writing to you as a result of the recent string of crime in our community. Your press release, dated September 8, 2015, comes after the violent Labor Day Weekend. While my questions and comments often refer directly to this release, please recognize that they are not exclusive to the events of this past weekend, but rather, this year.


According to Chicago Police Department Crime Statistics and media reports, since August 20th there have been reports of: multiple armed robberies, including eight this past weekend, a shooting at the Belmont Red Line, numerous motor vehicle thefts, a stabbing that brought and “unresponsive” victim to the doorstep of Illinois Masonic Hospital, a football-style attack on a defenseless woman, and so on.


I appreciate that we live in an urban environment and I’m not naive enough to believe that complete eradication is possible. That said, in my view the status-quo is untenable and unacceptable.


Taking all of this into account, my questions are as follows:

1. In your press release you make reference to having “formally asked for more police in our 19th District.” Why hasn’t this been done before? If it has, why has our police force consistently declined? You are our voice with the powers-that-be, why are you being ignored?

2. In your press release you make a reference to Cmdr. Cesario’s commitment to “increasing staffing on the first watch.” How will you monitor whether or not staffing levels are increasing? Inherently any measurement must include a starting point for staffing levels. What staffing levels are you using as a baseline? How are you planning to hold Cmdr. Cesario accountable? Why should we be confident that “this time will be different?” How do you plan to inform us of the status of your monitoring and management of the process?

3. One of the “big developments” is the advent of “public roll calls.” It’s my understanding that the purpose of such a display is to deter would-be criminals by allowing for local residents to “positively” interact with police. This confuses me. Lack of local resident familiarity with police is not a problem if crime is imported into Lakeview from other parts of Chicago. How is this nothing more than a “show” rather than an actual solution?

In reading your press release, it’s clear you’re a busy man. You’re “actively involved in the court advocacy program,” you “regularly attend court dates with victims…,” you “participate in the North Side Community Justice Center Steering Committee…” and so on. I appreciate that such civic interaction is a part of your job description, but in the business world we almost exclusively care about outcomes.

4. Considering all of the time you’re spending monitoring and “problem-solv[ing]” why is violent crime increasing in our neighborhood? Is it possible that perhaps it’s time to make an adjustment to the approach? If so, what can you do differently?

Given your profession, you are well aware of how fragile reputations are. If Lakeview continues on this path it is my fear that it could impact our reputation as an exceptionally safe neighborhood, particularly in light of the broader problems other parts of Chicago are currently facing.


Any changes in reputation could have serious consequences, for everyone. Such a decline could negatively impact property values. It could impact the ability to attract new business to our community. It could impact the stability and quality of our local public schools. And cast a pall over the universal vibrancy that those of us who choose to live in Lakeview know and love.


I’m certain the concerns I have are shared with a multitude of your constituents, and you, for that matter. We all have a vested interest in ensuring that crime has no home in Lakeview. I look forward to your response to my questions and I will follow with great interest the outcomes of your initiatives.


P.S.: I would recommend a more active profile on social media. It’s my experience as a business owner that dealing directly, and immediately, with your “customers” provides many benefits and can assuage anxieties that legitimate confers and questions aren’t falling on deaf ears.