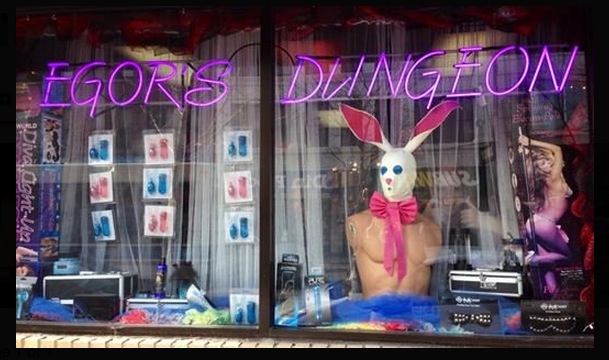 A Belmont Avenue lingerie store Sunday afternoon became the latest victim of an on-going robbery surge in our neighborhood.

Employees at Egor’s Dungeon, 900 W Belmont, told police that a man came into the store around 2:20PM and demanded that they hand over valuables. While the offender never displayed a handgun, he warned workers “don’t make me take it out.”

The robber, who wore novelty contact lenses that made his eyes appear to be white, wore a Mickey Mouse t-shirt and blue jeans. He was last seen running northbound in the alley adjacent to the store.

Officers recovered the Mickey Mouse shirt about one block away.

The same store was robbed at gunpoint in June 2014.

Meanwhile, a Lakeview man was accosted as he left the Addison Red Line station early Saturday by two men who forced him to withdraw money from a nearby ATM.

The victim told police that he was walking toward his home around 5AM when the two offenders stuck an unknown object in his back and implied that they had a gun. Both offenders fled northbound. They are described as two black men, one of whom had dreadlocks and the other wore a gray hoodie.

Welcome To The Area!

A visitor to the neighborhood sought help in the Wrigleyville McDonald’s at 6:30AM Sunday after he was robbed nearby.

The victim, who is unfamiliar with the area, was unable to tell police exactly where he was robbed by the two offenders, but he estimated that it was about four blocks from the McDonald’s.

UPDATE: The victim determined that the robbery occurred in the 900 block of Roscoe. A report was filed.