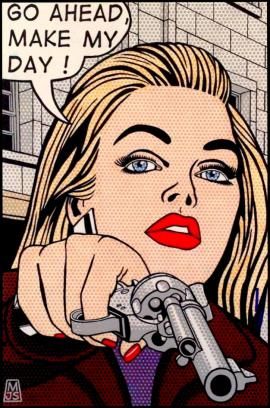 UPDATE 2:21PM: Robbery charges have been filed against Raheem McCaskill, 21, and LeDonte Washington, 20, in connection with these incidents. Bail information is pending.

An investigation into possible connections with other crimes, including robberies, continues, according to a police source.
———
Two men are facing charges after allegedly pointing a gun from a vehicle toward two people in nearby Lincoln Park yesterday evening.

Police are now working to determine if the men are responsible for other crimes in our area, including two similar incidents last week in which victims reported having guns pointed at them from a white car.

One of last night’s victims told police that the men drove up to him in a white sedan on a side street near Clark and Fullerton around 6:30PM. The passenger then pointed a gun in his direction and said something about wanting the victim’s shoes before the car drove away, the man said.

Moments before the man was threatened, another victim told officers from the neighboring 18th district that he had been threatened with a gun by two men in a white car in the same area.

Police soon located the car and its occupants at Kemper and Orchard, near the DePaul University campus.

Last Monday afternoon, a parking attendant reported that a gun had been pointed in his direction by a passenger in a white sedan near Diversey and Clark. Minutes later, a similar report came in from a man who was working near Cornelia and Broadway in Boystown.

The men who were arrested yesterday match the general descriptions given by last week’s victims.