Two recently installed emergency call boxes on the far north end of Lakeview came at a steep price for local taxpayers: $20,000. Each.

Even worse than the price tag may be the fact that some residents now want the boxes removed and there are indications that the phones—designed to help victims report police emergencies—don’t work reliably.

A CWBChicago investigation has found no public records about the phone project; no records about how the contractor was selected; and no records to shed light on the decision to plant the phones on the northern border of Lakeview instead of near well-known crime centers.

The tax funds were supposed to be used to spruce up streetscapes, enhance security and boost business on long stretches of local commercial streets: Belmont from Racine to Halsted; Clark from Belmont to Byron; Sheffield from Diversey to Irving Park; and Addison from west of Clark to Reta.

In 2013, the group spent a total of $2,000 on items it claimed were for “public safety.” $1,200 of that tax money was for a T-mobile cell phone, and another $800 was paid to Constant Contact, a company that specializes in email newsletters.

In 2014, Chicago View budgeted $2,400 of taxpayer funds for “safety programs,” but only $1,299 of that was spent. Again, the “safety program” for the year was simply a T-Mobile account labeled “security phone.”

And 2015’s safety budget was used for the T-Mobile phone until October 25. That’s when Chicago View first applied for a city permit to install the emergency call box on Sheridan Road at Dakin.

One month later, Chicago View distributed $9,878.76 to Keyth Security Systems. That would be the first of many payments to Keyth—eventually totaling $40,0056.96 for the two call stations, which are located about one block apart.

If the concept behind the phones was to give crime victims a way to communicate during an emergency, Chicago View could not have selected installation sites farther from neighborhood crime centers.

Year after year, Chicago Police Department statistics show that street crime in Lakeview is centered around Belmont and Sheffield. Secondary hot spots include the 800- to 1000 blocks of West Belmont; and the 3500 block of North Clark Street.

All of those areas were within Chicago View’s oversight yet none of them was selected for the 5-figure emergency phone systems.

This heat map, created with Chicago Police Department data, plots reported crime in our area during 2015 and 2016, with red areas having the highest concentration of incidents. The black lines are the streets included in SSA #17 and the numerals 1 and 2 mark the locations where Chicago View chose to install call boxes.

Making site selection more questionable is the fact that the Fremont/Irving Park phone is located about 15 feet south of the intersection where it cannot be seen from many angles. It’s also across the street from Thorek Hospital, which would seemingly offer crime victims a reliable place to seek help in the area.

CWBChicago editors reviewed three years of books and records from Chicago View. None of their public meeting agendas or minutes contain any reference to the call box project.

And the group’s annual contracts with the city, which required them to disclose contractors who would be paid more than $10,000 in taxpayer funds, never mention Keyth or the phone projects.

Businesses and neighbors who live near the call boxes were apparently not asked about the call box idea. Because some of them are now circulating a petition to have the phones removed.

The bright blue boxes are unsightly and project an image of being in a high crime area, they say.

44th Ward Alderman Tom Tunney stripped SSA oversight from Chicago View in November after cries of poor service and misplaced priorities became too loud for the city to ignore.

“The city wanted to revisit, frankly, how they spend taxpayer money,” Tunney aide Chris Jessup told DNAInfo at the time.

Now, the service area is under the stewardship of the Lakeview East Chamber of Commerce.

“We don’t have any information why [Chicago View] choose these areas and if there were any public meetings or surveys or stats taken to best determine the locations for these boxes,” Martino said.

Have the phones ever actually been used in an emergency?

“The usage is very minimal,” Martino said, “and when tested, there was no response, so the effectiveness of the boxes are not showing favorable.”

The call boxes aren’t the only thing not mentioned in the minutes and agendas of SSA #17’s public meetings held on Chicago View’s watch.

The truth is that those records show almost no detail about anything that was discussed at any of their meetings since 2013.

Martino’s group is the long-time administrator of a different Lakeview SSA that serves the Broadway commercial strip.

Public records show that her team has routinely published detailed minutes of that SSA’s meetings, providing taxpayers and businesses with a transparent look at what’s being done with public money. 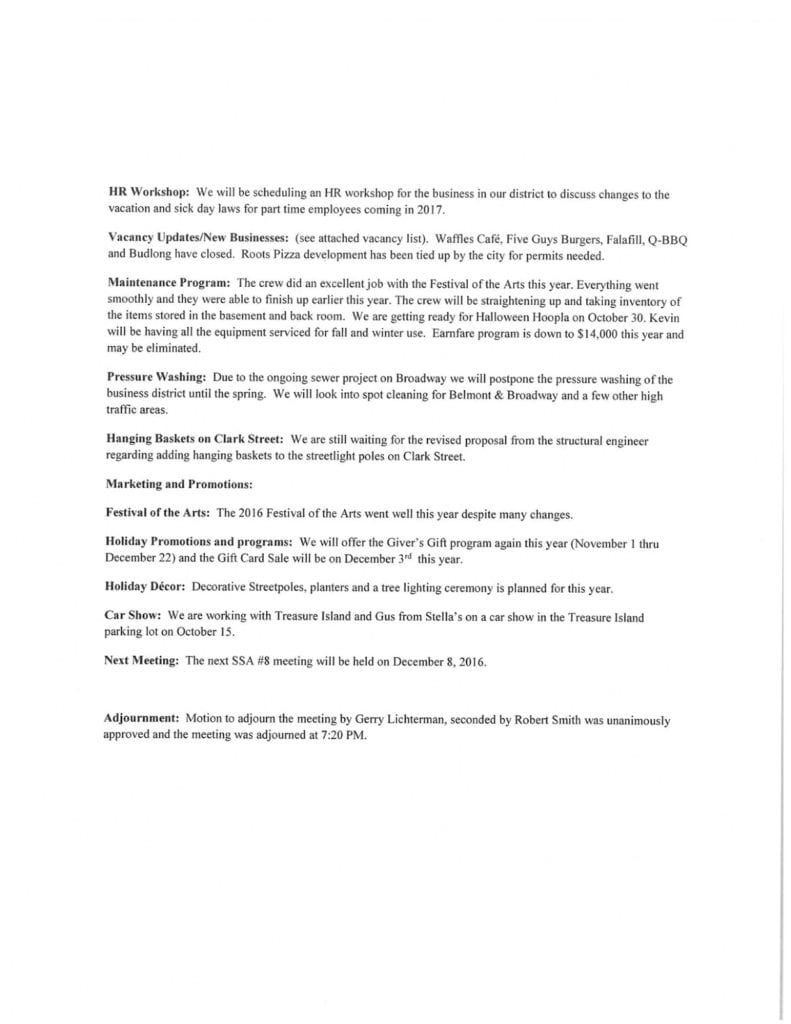 As for public safety expenses, the chamber has focused on providing security patrols in its service area during crucial hours, according to books and records furnished by the city.

And private patrols are the backbone of Martino’s security plan for the area formerly overseen by Chicago View.

Soliciting public bids for patrol services and awarding a contract were among the first things her group did this year.

Refreshingly, the Chamber of Commerce is focusing its public safety efforts on well-known crime hot spots.

The Belmont corridor will be a focus of its private patrols, and a satellite security office is being established in a storefront at Belmont and Sheffield.

As for the $40,000 call boxes on the north end of her new territory, Martino said the phones “are currently under review.”