Wrigleyville and Boystown, the North Side neighborhoods that five years ago festered with more violent robberies per block than any other part of Chicago, can do what they do best: celebrate.

Thanks to more aware local residents, an influx of privately-funded security, and a local police command staff that encourages its officers to track down street criminals, the neighborhoods this year are enjoying the lowest number of reported robberies since at least 2001. 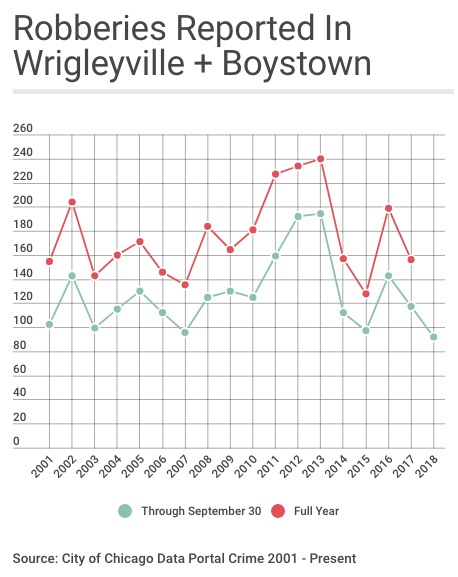 Only four robberies were reported in Wrigleyville and Boystown during the entire month of September. That is by far the lowest robbery count for any September on public record.

Through September, the neighborhoods recorded a total of 92 robberies this year, that’s four fewer than 2007, the second-best year-to-date performer. 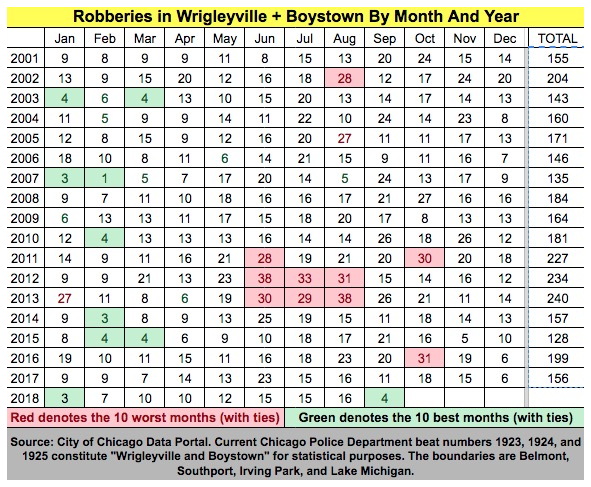 Officers who led the Wrigleyville and Boystown community policing meetings through 2011, 2012, and 2013 ignored repeated calls from the public to address the rising robbery problem. One CAPS officer delivered a bald-faced lie, claiming that “just the other day, the sergeant and I arrested a robbery offender. Isn’t that right, sergeant?”

The sergeant, whose complete lack of tools other than a comically-small revolver on her duty belt spoke volumes about her lack of street exposure, nodded half-heartedly. Police department records showed there had been no recent robbery arrests in the Town Hall District.

It wasn’t until politicians, the CAPS officers, and local police command staff met the furor of standing room only community meetings that action began to be taken.

The Right Kind Of Leaders

Under fire from the neighborhood, the commander of the Town Hall District in 2013, Elias Voulgaris, replenished manpower on the district’s overnight shift. Despite being responsible for two of the largest nightlife zones in the entire city, previous police commanders shrank the overnight police presence. Many patrol cars sat empty on overnights because there weren’t enough officers to run them. Several squads that did operate were one-man units, unable to handle higher-risk calls on their own.

Voulgaris also launched directed patrols and anti-robbery missions in which tactical units scoured Wrigleyville and Boystown’s alleys and side streets in search of problems.

Under Voulgaris, robberies were driven down from 240 to just 157 in a single year. When he was transferred to a new position in April 2015, Wrigleyville and Boystown were on their way to a better place.

But 2016 showed what can happen when police leaders take their eyes off the ball. Voulgaris’ replacement, Commander Robert Cesario, proved to be a cop of a different stripe. His advancement through the ranks of the police department came not from great accomplishments or high test scores, but because higher-ups selected him for “merit” advancements. Twice.

The difference was striking. Aggressive policing faded under Cesario. He was rarely seen at CAPS meetings and he did not find time in his day to respond to local residents’ emails, according to many CWBChicago readers.

Reported robberies in Wrigleyville and Boystown soared back to 199 cases in 2016.

In November 2016, Cesario was out, replaced by current 19th District Commander Marc Buslik, a 34-year veteran of the department.

Buslik brought an open-to-the-public style that works well. Several staffing changes were made under his watch, including the introduction of a new sergeant to lead the district’s robbery team.

The sergeant brought years of experience working anti-street crime operations. With Buslik’s blessing, the district’s robbery team has shown a level of aggressiveness rarely seen in today’s Chicago Police Department. While most of the department’s leaders worry about what might go wrong with a decision, Buslik seems to focus on what could go right.

In one early success on its new and longer leash, the Town Hall robbery team drove all the way to suburban Niles in pursuit of robbery offenders who were posing as Uber drivers. One of robbery victim’s credit cards had been used at a Walmart in the suburb. So, the robbery team high-tailed it to the Walmart and managed to arrest Nytina Raymond and two juveniles before the trio even left the parking lot.

During a rash of carjackings this month, the Town Hall team learned that one recently hijacked car was in the Woodlawn neighborhood. Rather than leave the work for officers on the South Side to handle, 19th District robbery team members sped to the South Side and got involved, searching yards and vacant homes for the offenders.

And last Thursday, after a woman was carjacked in the 20th District, it was the Town Hall robbery team that found the stolen car and tracked it all the way to the South Side where they were joined by a federal carjacking task force and other resources.

Two years is a long time for Chicago police commanders to be in one job, so there are rumbles that Buslik may be due for a new assignment or, possibly, retirement from the department. Whenever that happens, let’s hope that the CPD’s top leaders give careful thought to the kind of person they pick to take his place.

Chicago Mayor Rahm Emanuel and Boystown’s two aldermen, Tom Tunney (44) and James Cappleman (46), have failed to fulfill their promises to replenish the Town Hall District’s manpower. Staffing in the district has been slashed from 468 in late 2011 to 373 today.

Tunney and Cappleman voted in favor of the city’s largest property tax hike in 2016, saying the Town Hall District would be staffed by a minimum of 376 cops going forward.  Police Superintendent Eddie Johnson promised that by May 2018 the Town Hall District would be staffed at a level that Tunney found acceptable. CPD’s chief spokesperson said more officers would be delivered to Town Hall until its headcount was back up to 468 cops. None of those things has happened. Neither Tunney nor Cappleman has exercised their political power to make it happen. And, now, they are both seeking re-election, promising that they’ll get it fixed….in the next four years.

Meanwhile, local residents and businesses have not been sitting around. More than $500,000 a year is being spent by private citizens, businesses, and local tax funds to pay for private security patrols on the streets around Wrigleyville and Boystown. Thanks to money provided by residents in the Southport Corridor and an area west of the Belmont Red Line station, off-duty cops are filling the patrol voids left by the city’s understaffing.

The Chicago Cubs are footing the bill for off-duty security patrols on thoroughfares and side streets around Wrigley Field.

And local tax Special Service Areas (SSAs)—whose normal function is to create favorable business environments—have budgeted over $175,000 in tax money for private security patrols in 2018, according to their meeting minutes.

It’s reassuring to know that so many neighbors and businesses are willing to step up when elected officials refuse to do their own jobs. Maybe this time next year they’ll be able to put those monies toward something other than filling the gaps created by failed civil servants.

Note: For statistical purposes, CWBChicago considers police beats 1923, 1924, and 1925 to be “Wrigleyville and Boystown.” The boundaries are Irving Park, Belmont, Southport, and Lake Michigan. Chicago Police Department statistics are only available from 2001 to the present.
—————–
Our exclusive reporting is 100% reader-funded. Please make a contribution to our operating fund or purchase a subscription today.