While Chicago Police Department leaders continue to insist that “crime is down” citywide, crime may not be down in the places where you live, work, or play, according to an analysis of city data by CWBChicago. 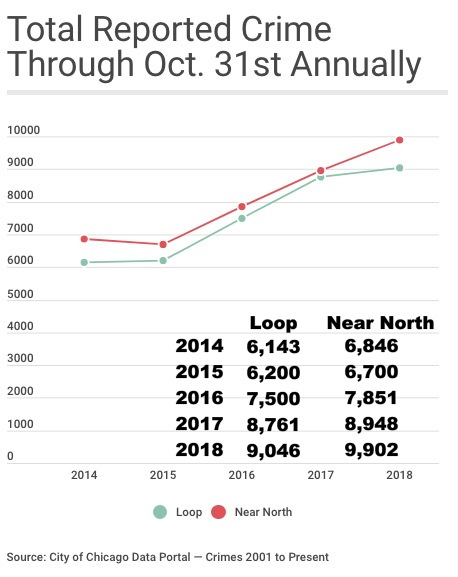 In fact, crime reports are at five-year highs in Lincoln Park, the Loop, and Near North neighborhoods which includes River North, Streeterville, the Magnificent Mile, and Gold Coast.

Overall reported crime in the Loop is up 47% over the past five years and 3% compared to last year. The Loop includes Chicago’s central business district, Theater District, and Millenium Park, among other popular attractions.

Among the crime categories that are at five-year highs in the Loop are homicide, shootings, assault, battery, and criminal sexual assault. A mid-year effort by police to curb the Loop’s out-of-control robbery problem has yielded some results, with 272 hold-ups reported so far this year compared to last year’s 306. 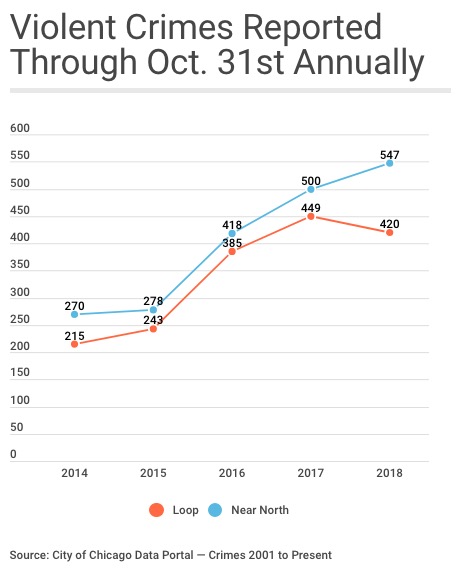 Reports of violent crime in the Loop—homicide, rape, robbery, and aggravated battery—have risen 95% in five years. The violent crime category is down by 29 cases compared to last year due to the previously mentioned efforts against robbery.

The Near North community area encompasses many of Chicago’s most popular tourist and nightlife areas, including Navy Pier, River North, Streeterville, and the Magnificent Mile. Reported crime there is up 45% over the past five years and up more than 10% year-over-year.

Compared to 2014, violent crime in the Near North area is up 103% with homicides, shootings, criminal sexual assaults, and robberies all currently at five-year highs. 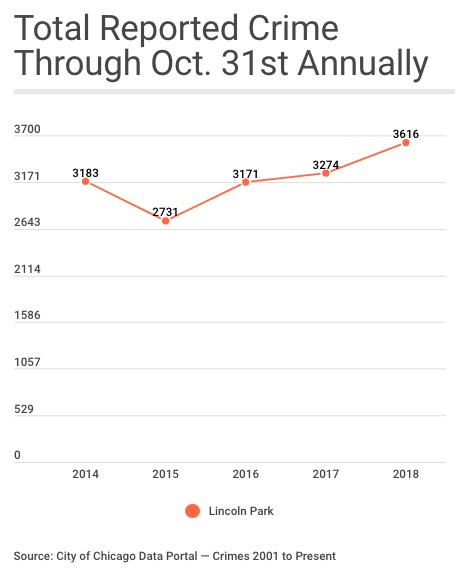 Lincoln Park crime is up 13% over five years and up 10% compared to last year.

Compared to five years ago, crime is also not down in Lakeview or the Near West community areas, according to the study.

On paper, crime is down by about 350 incidents in the Uptown neighborhood. But the reduction is not due to a massive decline in serious crimes. Instead, police have essentially stopped enforcing drug laws on the streets. As a result, there have been about 400 fewer narcotics crimes reported in Uptown this year as five years ago.

So, yes, crime is down by 350 cases in Uptown. But only because police have made 396 fewer drug arrests—just 44 this year compared to 440 during the same period five years ago.

In Lakeview, total reported crime is essentially flat compared to five years ago (4,386) and last year (4,348) with 4,429 cases reported so far this year. The neighborhood has seen robberies drop by more than 50% due almost entirely to a focused effort to reduce muggings on police Beat 1924 in Wrigleyville and Boystown.

Next time a police executive says “crime is down,” ask for specifics about Lincoln Park, the Loop, and Near North. High-ranking cops don’t run very often, but a question like that may do the trick.