Chicago police last weekend conducted an undercover operation that hoped to target criminals in the robbery-saturated River North entertainment district.  There is good news and bad news to report.

As CWBChicago has been reporting, violent crime, particularly robberies but also shootings, have taken a hold on the city’s downtown entertainment areas. 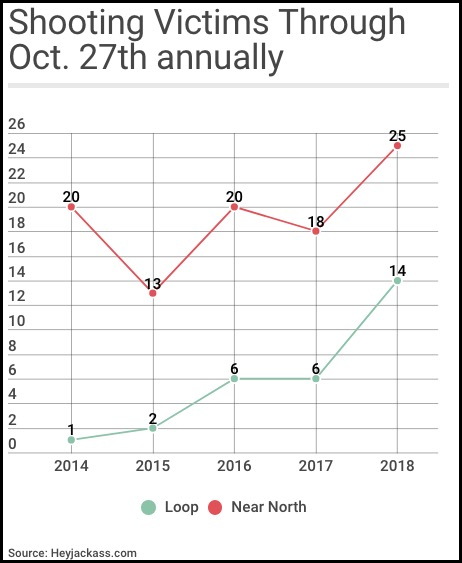 In the River North neighborhood, sixteen people have been shot this year as of October 27th. That compares to six at the same time last year, eight in 2016, and six in 2014, according to the site.

The good news about last weekend’s undercover operation is that in just four hours, the police made three arrests.

The bad news is that, even in the midst of a major police operation, a man was shot in an alley that was reportedly flooded with covert police officers.

Around midnight on October 27th, a group of detectives, tactical officers, and covert cops from the police department’s intelligence unit descended on the River North neighborhood. Their goal was to take down robbery offenders who prey on victims in the bustling nightlife area. A large contingent of officers was assigned to hide out and blend into the surroundings in a darkened alley that runs from State to Dearborn between Illinois and Hubbard Streets.

Within an hour, the operation snagged its first arrest.

According to police records, two covert police officers saw a robbery in progress and followed 18-year-old Kavatish Wallace as he escorted a 26-year-old Naperville man into an ATM vestibule. The disguised officers watched as Wallace was “holding up [the] victim to put [a] PIN into the ATM. No weapon was displayed,” a police report said.

When the ATM dispensed money, the victim dropped it onto the floor, and Wallace reportedly picked it up and walked out. Uniformed officers later arrested Wallace in the 100 block of West Illinois and recovered the victim’s credit cards and phone, police said.

Wallace was charged with theft, and he was released on a recognizance bond, according to court records.

Around 2 a.m., officers on the anti-robbery assignment recognized 38-year-old Frankie Barksdale as she walked in the 400 block of North State Street. Barksdale was wanted for stealing a phone from a man in the 300 block of West Hubbard on June 18th, officers said in their arrest report.

Barksdale was charged with felony theft, and Judge Mary Marubio set bail at $3,000. The phone theft charge is at least the 55th criminal case filed against Barksdale in Cook County, according to court records.

Then, around 4:30 a.m., undercover officers spotted long-time criminal Yolanda Smith in the 400 block of North State Street. She was found to be in possession of a phone, cash, Honduran currency, credit cards, and identifications that belonged to three different women, police said.

Prosecutors charged her with three counts of theft, and she was released on a recognizance bond. According to court records, Smith has been charged in 150 separate criminal cases in Cook County since 1987.

Just as Smith was being arrested, and about 20 yards away, a 21-year-old man walked into that dark alley where so many disguised cops had been stationed for the covert operation. The man wound up being shot in the leg as he stood next to an undercover police vehicle in the alley, according to an officer who was on-scene. The gunman and another person then walked out of the alley as officers radioed their descriptions to marked units.

The two suspects who were seen leaving the shooting were taken into custody in the Loop a few minutes later. But, despite being seen by an alley full of police officers, no charges have been brought against either of them.

All indications are that it will take many more late nights and intense efforts to reverse the flow of violence into the city’s downtown areas. Here are some of the many robberies reported in the first half of last week:

Woman calls 911 around 2:30 p.m. after being mugged in the 600 block of North Michigan Avenue. It takes 20 minutes for a police officer to arrive because the 18th (Near North) Police District is overwhelmed with incoming calls for help and no officers are available. Police are unable to find the victim when they arrive.

A woman is mugged as she walks near Erie and Orleans around 11 a.m. The offender got out of a car, snuck up behind her, pulled her headphones from her head, and then sped away.

Around 8 p.m., a woman is pepper-sprayed near Printers Row Park by “five kids” who steal her bag and run away.

The same group is believed to be responsible for robbing a 20-year-old woman outside the Jewel-Osco store at Clark and Division around 9:15 p.m.

At 11:55 p.m., a group of three men robbed a victim as he stood on the Van Buren Red Line platform. The victim is taken to Northwestern Memorial Hospital for a knee injury.
—————–
Support CWBChicago’s reporting team with a monthly or annual subscription. Members-only perks await!