After a 31-year-old man was shot in their neighborhood on Friday evening, some Lincoln Square residents did what many Chicagoans do after the city’s violence hits close to home: They headed to online neighborhood watch groups to talk about the incident and wonder if things are worse in their area than they used to be.

“Neighborhood shootings were a rarity, are now becoming a common thing,” wrote one poster.

But another resident countered with a line that Chicago politicians and some community policing offices love to use: “What we have been told is that the number has not gone up…social media has increased awareness, and repetition of the same incident keeps coming up on our threads.”

“That may be true to an extent,” a response read, “but the patterns are definitely changing. I’ve lived in the neighborhood 16+ years, and the last five have seen an increase of activity in this area.”

But someone else disagreed, “actually I believe the police data shows it has declined in general.”

So, what’s the real story?

CWBChicago crunched the city’s crime data the Lincoln Square community area from 2002 to today. After compiling the statistics on homicides and shooting incidents in the area, we think the answer is pretty clear…

Lincoln Square has recorded five shootings or homicides as of Friday night, June 14th. That’s more than any previous year in the study. 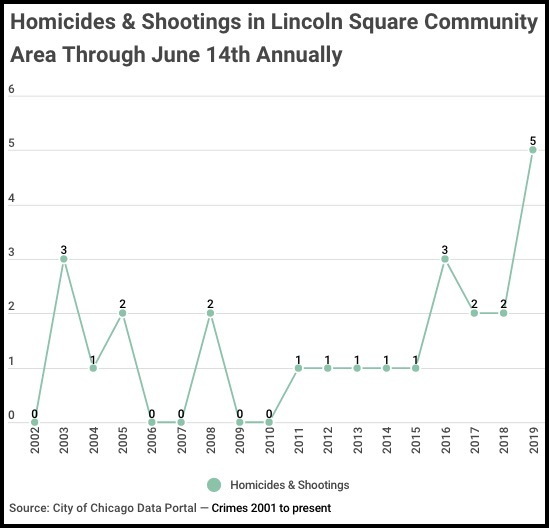 In fact, with Friday’s shooting, Lincoln Square has already recorded more shootings and homicides in 2019 than in any other full year since at least 2002, the city data shows. 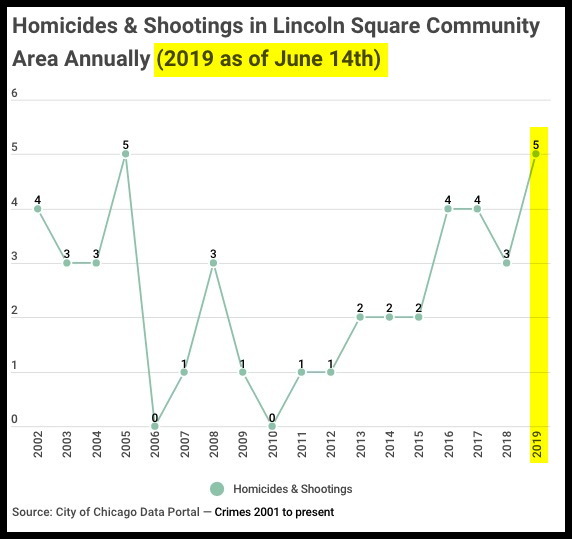 So, political spin and gut feelings aside, there appears to be a clear uptick in the most violent crime categories for Lincoln Square. While the overall numbers may be lower than some of Chicago’s most violence-plagued areas, the key for residents is to measure their community’s current performance by their community’s history.

It’s easy to feel good about yourself if you simply compare your weight to someone heavier. Comparing your weight to your past performance, though, is the often-sobering number that matters.

NOTE: The City of Chicago Data Portal provides crime statistics from 2001 to present. The information for 2001 is frequently incomplete, so CWBChicago opted to exclude that year from our study.