Reports of pickpockets have soared this year in Wrigleyville and Boystown, the side-by-side nightlife districts on Chicago’s North Side. And at least six more victims reported having their phones lifted in Boystown this weekend. No one is in custody.

A record 108 cases of pocket-picking were reported in the neighborhoods this year through July 10th. That’s far more than any year in available public records that date back to 2003. 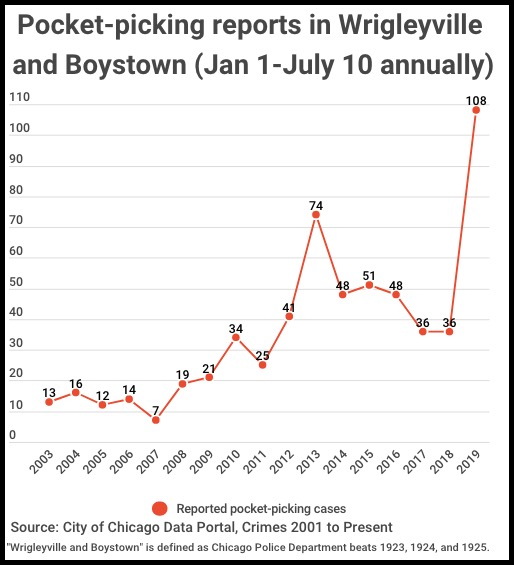 Early Saturday morning, five people reported that their phones were stolen while they kicked off the weekend at Sidetrack, 3349 North Halsted. Another victim flagged down police around 3 a.m. Sunday after his phone vanished in the 3400 block of North Halsted.

When the first iPhone debuted on June 29th, 2007, only seven pocket-pickings had been reported in Wrigleyville and Boystown that year.

But, expensive fit-in-your-pocket electronics quickly became the must-have item for many Chicagoans. And thieves were not far behind.

As of July 10th of this year, more than half of the neighborhoods’ pickpocketings took place in bars and taverns, according to police records.

Analysis of police reports shows that many victims tell police their phones were stolen while dancing or walking through crowded clubs.

By comparison, before the dawn of compact, powerful, and expensive smartphones, CTA buses, trains, and platforms were the site of most pocket-pickings in the area.

Police issued a community alert on July 8th to warn of pickpockets working Boystown clubs. Investigators said the offender in one of the thefts was a Hispanic man in his mid- to late 20’s who stands 5’10” tall and weighs 200 pounds. That description is similar to one provided by Saturday’s victims at Sidetrack: male, Hispanic, 30’s, 5’6” tall, heavyset, wearing a white dress shirt and navy-colored sport coat.

Pickpockets also struck hard during Pride Fest weekend in Boystown on June 22nd and 23rd, according to Chicago police. Twenty-seven pickpocket cases were reported on the festival grounds during operating hours.

Note: The City of Chicago’s Data Portal showed no pocket-picking cases in the area during 2001 and no cases until the second half of 2002. Most likely, the data available for those years is incomplete. As a result, we have not included them in our research.