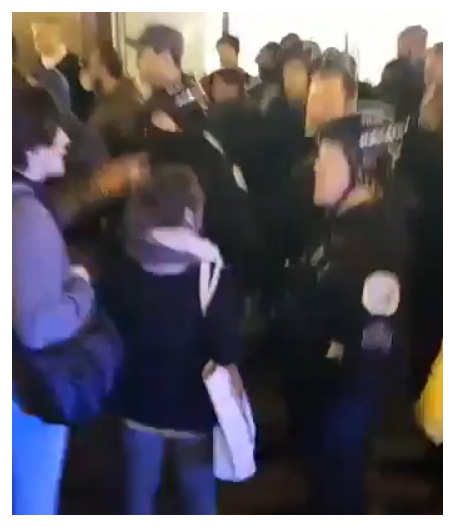 In newly-posted video, members of the Women’s March-Illinois are explaining why they confronted police who were trying to control a large group of teens in the Loop on Sunday night. But the woman’s anti-cop talking points are interrupted when a fight breaks out amongst a group of teens that is standing directly behind her.

As CWBChicago was first to report, the women encircled a small group of teens in front of Macy’s on State Street just moments after another group of youths allegedly threw rocks and bottles at police officers a couple of blocks away.

In the video, a woman claims that officers said that police were trailing the teens because groups had been going into stores and stealing merchandise.

The woman states that police have “no proof,” although CWBChicago reported that multiple retailers had made precisely that claim about the large groups, including the Walgreens store located less than a half-block from where the woman is standing.

Her speech comes to an abrupt end as someone next to the camera operator barks, “Oh! There’s a fight!” A group of teens can be seen pushing and shoving behind the woman officers move in quickly to break it up. One teen is detained.

“We demanded that they let go a teen that they handcuffed for throwing a bottle,” the group said of the video on Twitter.

On Facebook, the group stated, “The dehumanization of calling them a mob when a few individuals grabbed phones and caused fights leads to the mentality that they are all alike and all one step away from handcuffs. That racial profiling must stop.”

Two days after the women became involved, more than 30 people were arrested as another wave of large groups overtook the Magnificent Mile and Loop neighborhoods. At least three “large group” incidents have been reported in the downtown area since April 6th.

Chicago police and residents have learned that “bad actors” hide within large groups to carry out robberies, attacks, mass shoplifting, and other crimes in the downtown area. Police who trailed the groups were able to arrest offenders for battery, theft, shoplifting, and other crimes while allowing the majority non-criminal group members to continue enjoying their night.

Police routinely shadow large groups of people throughout the city, including at gang funerals, protests, busy days at beaches, and the march that these women participated in earlier on Sunday.