A Franklin Park man who broke a Chicago TV news crew’s camera equipment has been sentenced to spend more time in prison than many of the city’s recent gun offenders. His is a topsy-turvy story from a town that claims to be serious about fighting gun crime.

Ismael Pereda, 47, pled guilty Wednesday to knocking over two spotlights and a news camera that an ABC7 crew had set up for a live shot near Water Tower Place around 5:15 a.m. on Dec. 23rd. The damage was estimated to be $40,000. At the time of his arrest, Pereda was AWOL from a case in which he was accused of battery and resisting police in Franklin Park.

After receiving Pereda’s plea this week, Judge Timothy Chambers sentenced him to one year in prison with 182 days credit for the time he spent in jail before entering his plea. Pereda was shipped off to the Stateville Correctional Center in Joliet on Thursday. He arrived, underwent processing, received the state’s automatic 50% sentence reduction for good behavior, and was paroled the same day, according to state records.

Nonetheless, Pereda spent far more time behind bars than most people who pled guilty to carrying firearms illegally in Chicago.

Roderick Trice was also in Chambers’ court on Wednesday. The 21-year-old was facing four felony gun charges after police said they found a loaded handgun during a traffic stop in Uptown on Nov. 23.  According to police, Trice told them that “It’s an old gun and I only have it for protection. I’m trying to get my FOID (Firearm Owner’s ID card).”

In exchange for his guilty plea on one count of aggravated unlawful use of a weapon, Chambers sentenced Trice to two years probation and 50 hours of community service. Prosecutors dropped the other three felonies.

Recently, 21-year-old Sheldon Graham was in front of Chambers.

Graham had been charged with multiple weapons counts, including Class X armed violence and possessing a handgun with a defaced serial number after police said they found him with the pistol in a car on the Magnificent Mile last November.

He pled guilty to one count of aggravated unlawful use of a weapon in a vehicle and Chambers sentenced him to two years of “first offender gun probation” and 50 hours of community service. Despite being charged with a Class X felony (the most serious crime category other than murder), Graham was allowed to go free after his arrest by posting a $500 deposit bond.

In another case handled by Chambers, two Indiana men each pled guilty to having a pair of firearms in a car that they were sitting in near the Magnificent Mile on June 22 last year. Chambers sentenced 25-year-old Kyle Kostro and 21-year-old Joseph Buncich to two years of “first offender gun probation.

David Williams, 24, recently pled guilty to having a loaded handgun in a Jaguar that was parked on the Hubbard Street bar strip in River North last summer and also received two years of gun probation from Chambers. Williams went free after his arrest by posting a $1,000 deposit bond.

Chambers gave the same sentence to Daniel Lancheros, a 23-year-old who was accused of having a handgun while riding as an Uber passenger near Western and Foster in February 2018. Police said Lancheros is a Latin King who scored 354 out of a possible 500 on the department’s Strategic Subject’s List, which “purports to identify which Chicagoans are most likely to be involved in violence, either as a victim or perpetrator.”

But Chambers isn’t the only judge who gives gun offenders less time than the guy who broke Channel 7’s equipment.

Police said in a report that Davis told them that he works in the area and he brought the gun with him from the South Side and he had been walking around looking for a guy who had threatened to shoot him.

Lazar Youkhana, a retail clerk who fired “two, maybe three” warning shots while pursuing two boys who stole bottles of Hennessey from his liquor store, receive one year of probation from Haberkorn. Youkhana cut a deal with prosecutors who agreed to drop two felony weapons charges and reduce a reckless discharge of a firearm count to reckless conduct.

A Riverdale man who was found with a gun in his car during a traffic stop in Lakeview last December and allegedly told cops he carries a weapon “because it’s Chicago” was sentenced to one year of court supervision by Haberkorn recently. Valladay went free after his arrest by posting a $150 bond.

Haberkorn gave two years of “first offender probation” to 21-year-old Samuel Conley of Romeoville. Conley was arrested at North Avenue Beach last Fourth of July weekend after cops reportedly found a 40-caliber handgun with an extended magazine in his backpack at a liquor checkpoint.

Judge William O’Brien gave two years of “first offender probation” to Mario Hernandez after the 18-year-old pled guilty to flashing a handgun near Oak Street Beach in May 2018.

Zion Davis was arrested last November after a Marshalls store security officer found a loaded handgun in his jacket while processing the 18-year-old for allegedly shoplifting at the chain’s Lincoln Park location. Police said Davis admitted to purchasing the firearm from someone he met on Facebook. O’Brien allowed Davis to pled guilty to a reduced misdemeanor charge and handed him a sentence of 18 months probation.

O’Brien also approved a reduced charge for 37-year-old David Rhodus, who was accused of holding a loaded handgun on his lap as he sat in a Lincoln Park bar on Feb. 4th, 2018. Rhodus, who had a FOID but not a concealed carry license, was sentenced to two years probation.

Finally, there’s the case of Indianapolis resident Lapre Apple. A group of police officers who were standing in line at a West Loop fast food restaurant noticed that the man standing in front of them—Apple—had a gun with an extended magazine sticking out of his waistband.

The officers secured the handgun and arrested Apple, who said he had a concealed carry license in his home state, but not in Illinois. Police said they found 350 suspected ecstasy pills and $3,202 cash in Apple’s pockets.

Judge Steven Watkins sentenced Apple to 12 months of court supervision after the 21-year-old pled guilty to aggravated unlawful use of a weapon. Prosecutors dropped narcotics charges and three additional weapons charges in the deal.
—————– 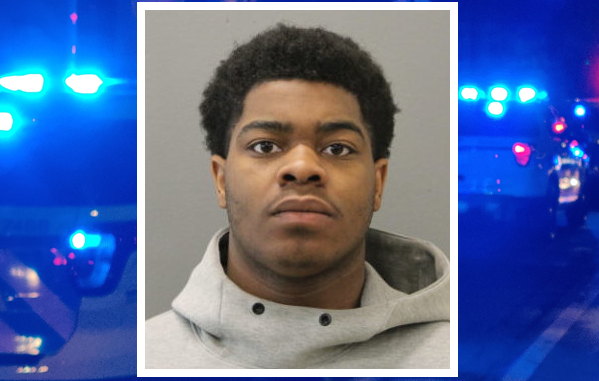